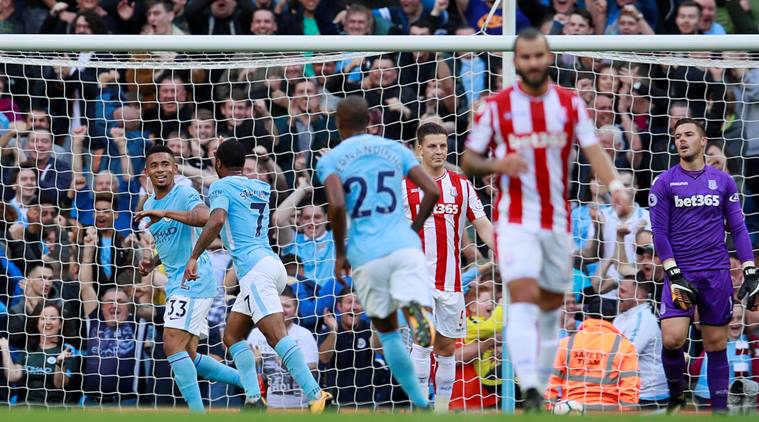 Manchester City demolished Stoke at the Etihad to move two points clear at the top of the Premier League. Here’s what we learned from an incredible attacking masterclass…

Seven of the Best

Remember when Pep’s Barcelona were winning by four or five goals a week and everyone said it was because of Messi? Or when Bayern demolished the Bundesliga with ease and the consensus was that anyone could win it with Ribery and Robben? Yeah, I’m starting to wonder if that was a little off the mark.

That’s 17 goals for City in their last three league games this season- and overall they’re averaging more than three and a half goals a match in England’s top flight. The boys in sky blue are an attacking machine, more than happy to score from everywhere and anywhere, with a staggering eleven different goalscorers already this campaign. The most impressive thing about this is the calibre of goals scored. Seven lovely strikes, from Fernandinho’s wondergoal to Bernardo’s intricate late misery compiler- and not a single lucky deflection or OG in sight.

Simply the best player in the Premier League right now and arguably the greatest midfielder in the world. Kevin De Bruyne was in stunning form once again, with a ridiculous display that included 2 assists and 2 “second-assists”. He controlled the match, pulling absolutely every string and allowing no room for Stoke error. His tenacity was once again commendable, bullying the Stoke defender into giving the ball away for the fourth goal, and his final ball is probably the best I’ve ever seen, highlighted by two inch-perfect passes to assist Sané and Gabriel Jesus in the second half. He’s only getting better and that alone is enough to terrify opponents. In a world where Paul Pogba is worth £90m, Kevin De Bruyne should be going for about twice that much- not that City have any intention of selling.

It’s probably worth mentioning Stoke City. The visitors were not dreadful despite the scoreline, although they did score two fairly fortunate deflected goals. The bright spark for Mark Hughes’ men was certainly Mame Biram Diouf, who was given a rare chance to shine in a more attacking role and certainly took it.

The Senegal international was unfortunate not to be credited with a brace after his second effort snuck in off Kyle Walker’s knee, but never gave up and caused problems for City all game. Young Tom Edwards also enjoyed an impressive game on his debut, but it was sadly cut short with a nasty injury that saw him stretchered off after half-time.

Seven goals for City today and Sergio Aguero didn’t even get off the bench. The three players that did- Yaya Touré, Ilkay Gundogan and Bernardo Silva- all easily make pretty much every list of the top 100 players in England right now. That surely tells you all you need to know about Manchester City’s staggering squad depth, and it certainly paid off today.

Aguero’s main competitor Gabriel Jesus managed two lovely goals, substitute Bernardo completed the rout late on with a calm finish, and Fabian Delph managed another comfortable showing at left-back in the absence of Benjamin Mendy (who was, by the way, a Twitter wizard once again throughout the match). Eliaquim Mangala, Danilo and Claudio Bravo were also unused substitutes, showcasing the fact that Manchester City have quite possibly the best squad in the world.

Manchester City have scored 29 top-flight goals in their first eight league games. Twenty-nine. In eight. That’s a little bit mad, if we’re being honest, and a feat that hasn’t been accomplished in England since the nineteenth century. Add to that a much-improved defence- City have conceded just one goal in every two league games this season- if that’s not the form of champions, what is?

Around them, United disappointed at Anfield earlier today, Chelsea lost to Crystal Palace over in London and Tottenham scraped past Bournemouth 1-0.

iBy comparison, Pep Guardiola’s side are looking pretty comfortable at the top of the league this year, even if the gap is just two points. A stat to leave you with: Manchester City have three players on six league goals each this season- the same tally as Alvaro Morata and Harry Kane and one fewer than Romelu Lukaku.