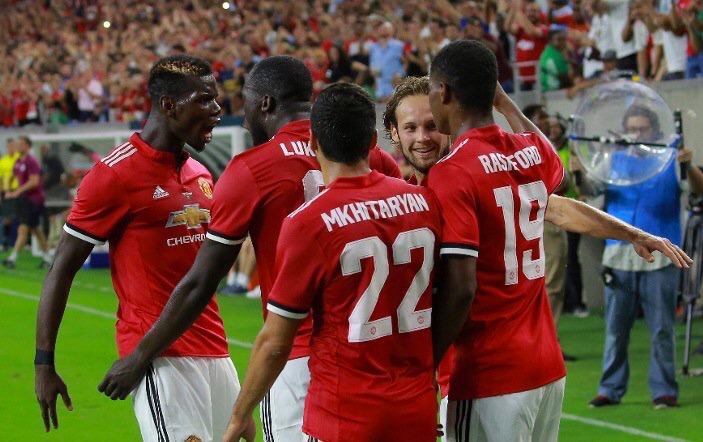 Separated by less than five miles, Manchester Untied and Manchester City each travelled over 5,000 miles to Houston, Texas to take part in the first Manchester Derby to be held outside of the UK. Here are five things we learned.

With two pre-season games under their belt, Manchester United were always likely to be the fittest and sharpest side on display in this one, and so it turned out.

It was a lively opening with both sides looking keen to impress against their City rivals. Rashford, Herrera and Lingard provided good energy for the Reds, while Sterling, Aguero and De Bruyne did the same for the Blues.

However, City’s tempo began to drop after 25-30 minutes, and were made to pay by the sharper Manchester United side, who opened up a quick fire 2-0 lead with two goals in two minutes towards the end of the first half.

As expected, City made a whole host of changes at half time time, whereas the majority of United’s players played to, or beyond the 60 minute mark.

Lukaku offers something new for United

After watching Zlatan Ibrahimovic lead the line for United, fans should get used to the £75m man offering something different.

The Belgian gave United the lead in the 37th minute. A fine long ball up field found Lukaku who used his pace to skip past on rushing City debutant Ederson and tucked the ball into the open net from a very tight angle from around 12 yards. A very impressive finish from Lukaku and a different option for United compared to last season.

Henrikh Mkhitaryan is starting to looking like the creative player that Manchester United thought they were getting last season. He had a difficult opening season at Old Trafford, despite scoring 11 goals, the majority of which in the Europa League.

However, three games into Manchester United’s preseason tour, and the midfield Armenian looks like the key creator. Playing as the number 10 again, his driving run set up the second goal, giving him two goals and two assists on tour so far.

17-year-old Stockport lad Phil Foden was one of Manchester City’s best performers despite the plethora of star names on show for the Blues.

Last seasons Academy player of the year did not look out of place in a side that boasted the likes of Sergio Aguero, Raheem Sterling and Kevin de Bruyne in the first half.

However with the likes of Leroy Sane, Bernardo Silva and David Silva also in contention for the positions in the attacking midfield, it’s hard to see Pep Guardiola choosing the youngster, but with displays like this against top opposition, Foden has certainly staked his claim.

It was only the first game of pre-season for Manchester City, but the lineups certainly tell you why City need signings.

£54m man Kyle Walker played a full 90 minutes at right-back, while there were no recognised left-backs on the field for the Citizens throughout this derby match. Guardiola opted for central midfielder Fernandinho to play at left-back in the first half, while returning loaned central defender Eliaquim Mangala played there in the second period.

City are expected to sign Real Madrid’s Danilo, while are also in the market for Monaco’s Benjamin Mendy, having let Pablo Zabaleta, Bacary Sagna and Gael Clichy leave the club this summer.

Both City and United face Real Madrid in their next matches. United go first on July 23rd in Santa Clara, California, while City play the European Champions three days later in Los Angeles.