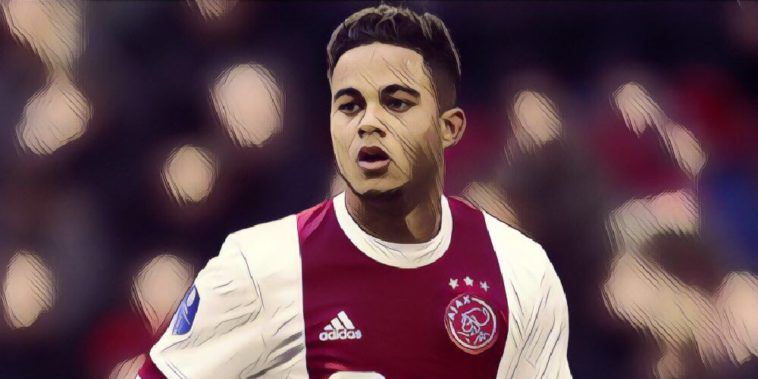 Manchester United target Justin Kluivert has admitted that it is his dream to follow in his fathers footsteps by playing for Barcelona.

The Ajax winger has been linked with a move to Old Trafford for the last 12 months or so, especially in the wake of Ajax’s Europa League final defeat to United last May when he was seen chatting and smiling with Jose Mourinho.

Speculation at the time suggested that Mourinho had promised to sign him this coming summer, although Kluivert has recently revealed what was actually said.

However, having picked up the NxGn award for being the World’s Best Teenage Talent, he told Goal that he dreams of following in his fathers footsteps by playing for Barcelona.

“To follow in my father’s footsteps? Yes. That is my dream club in the end. I would not mind going elsewhere, but Barcelona is the dream.”

Kluivert’s father is of course the Dutch legend Patrick Kluivert, who scored 40 goals in his 79 international caps for the Netherlands. He was a part of the legendary Ajax team of the 90’s winning two Eredivisie titles as well as the Champions League.

He spent one year at AC Milan before making the £8.75 million move to Barcelona – where he would score 122 goals in 257 appearances and play alongside the likes of Rivaldo, Luis Figo and Ronaldinho.