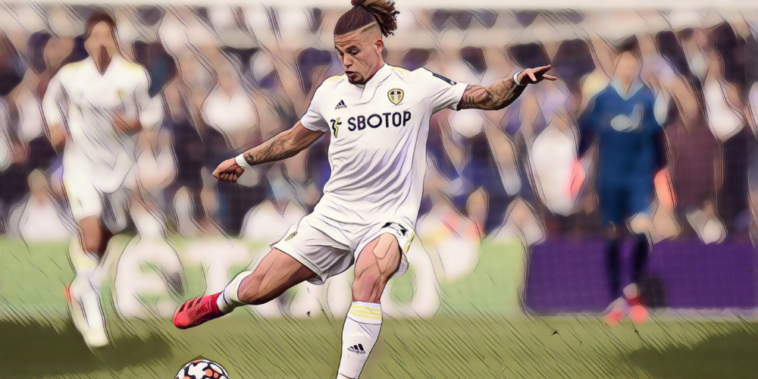 Manchester United are being linked with an interest in Leeds midfielder, Kalvin Phillips as an alternative to Declan Rice.

United enjoyed an impressive summer of recruitment, adding Jadon Sancho, Raphael Varane and Cristiano Ronaldo to the side who finished second to Man City last season.

While each addition seems to have addressed specific issues within Ole Gunnar Solskjaer’s side, one glaring area still in need of surgery is that in the heart of midfield.

The Norwegian has often resorted to playing a midfield duo of Scott McTominay and Fred, with Paul Pogba having to settle for a place out on the left.

Neither half of the McFred partnership seems particularly suited to play in the holding midfield on their own, with Manchester United believed to be waiting until next summer to make a move for West Ham’s Declan Rice in what could be the final piece of the jigsaw.

A move for Rice earlier this summer simply wasn’t a realistic possibility, with the Hammers publicly setting their asking price in excess of £100m for a player who still has three years left to run on his deal.

However, according to the Star, United could ‘abandon’ that interest in Rice in favour of a move for Leeds midfielder, Kalvin Phillips, with Rice deemed ‘not worth what the Hammers want’.

The 25-year-old has shone for Leeds during their rise from the Championship back to the Premier League, and has been affectionately dubbed the Yorkshire Pirlo by the Elland Road faithful.

Having impressed under Marcelo Bielsa, Phillips put in some impressive performances – alongside Declan Rice – at this summers Euro’s, featuring in every game as the Three Lions progressed to the final before their eventual penalty shootout defeat to Italy in the Wembley showpiece.

Should the report have any legs whatsoever and United do make a move for Phillips, he wouldn’t be the first to cross the divide between the two rivals, with Eric Cantona, Alan Smith and Rio Ferdinand all famously joining Man Utd, while Dan James moved in the opposite direction earlier this summer.

Phillips’ current contract with the West Yorkshire side runs until 2024, with his agent stating this summer that he has ‘no desire’ to leave his boyhood club.

See also – Opinion: The Poverty and Envy behind the ‘Emptyhad’ banter