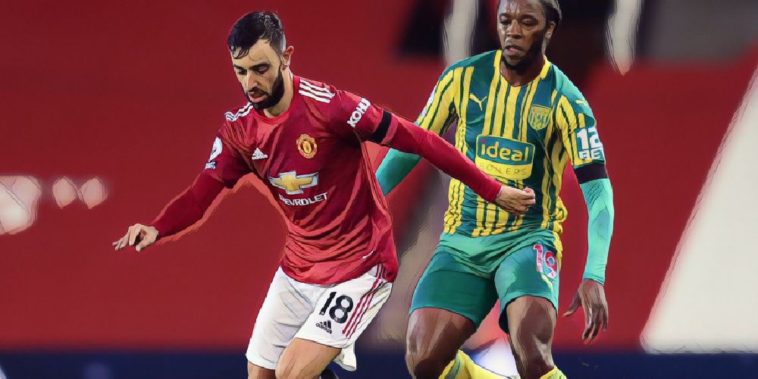 A retaken Bruno Fernandes penalty saw Manchester United finally move into the top half of the table as they laboured to 1-0 win over West Bromwich Albion at Old Trafford.

Plenty of the talk before the game was about Manchester United’s miserable home form, the Red Devils without a league win at their famous old home in their last six outings.

Solskjaer’s side started sluggishly and struggled to break down a well-drilled West Brom backline, though the Baggies did have ‘keeper Sam Johnstone to thank for keeping the scores level early on, the former United academy prospect getting down low to his left to smartly save an Anthony Martial effort – the highlight of an uninspiring the first half.

However, within the first 60 seconds after the interval, the drama sprung to life, with West Brom being handed a penalty for a challenge by Bruno Fernandes. However, referee David Coote controversially decided to change his mind after looking at the footage pitchside, despite it seeming to suggest the Portuguese playmaker made contact with Conor Gallagher.

Eight minutes later and Coote was pointing to the spot again, this time, a Juan Mata cross being blocked by the hand of Darnell Furlong, with Fernandes slotting home at the second time of asking after his first effort was saved by the impressive Johnstone who was a good yard off his line.

United continued to labour for the remainder of the game, while West Brom were denied by the bar and a couple of decent saves from David de Gea as the hosts held on to bag their first home league win of the season to move into the top half, and to within four points of the top four places.

47' Bruno Fernades gives away a penalty, overturned by VAR.

Speaking afterwards, United boss Solskjaer admitted his side were perhaps ‘lucky’ to see the penalty against them overturned.

“I looked at a penalty this afternoon, [in the] Villa-Brighton [game] and there’s contact on the ball and then the man,” he told BT Sport.

“In my head, it might be a penalty. Maybe here we’re a tad lucky but none of them are a given. Maybe the rules are different to how I interpret them.”

Speaking to Match of the Day, the Norwegian added that while the win wasn’t exactly pretty, it will help to build ‘momentum’ after what has been an inconsistent and underwhelming start to the season.

“It’s nice after the international break that you get a win,” he said. “We needed that win at home. We looked unsettled towards the end even though we should score one or two more to have a more relaxed finish. It’s never comfortable against players of this quality. They had a couple of chances and David [de Gea] made two fantastic saves. Tight margins decide games but the mood is decided by the results.

“It’s up to us to create momentum, we have the chance to continue the good start in the Champions League and Southampton away is a very difficult game as well. Hopefully, we get a few more back and can kick on.”

Next up for United is another home tie against Istanbul Basaksehir in the Champions League before travelling to face an in-form Southampton side next weekend.