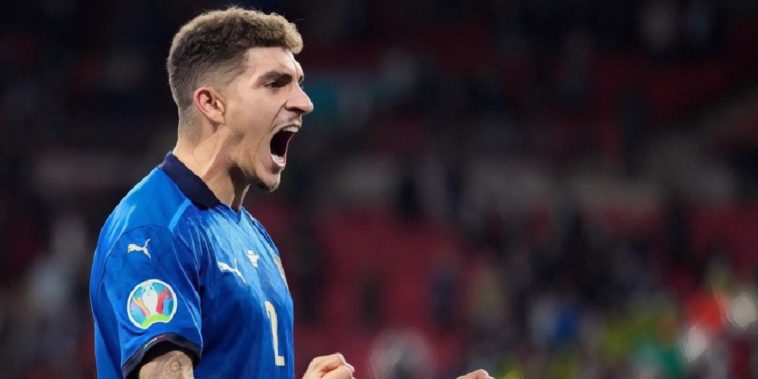 Manchester United have been linked with a move for Italy right-back Giovanni Di Lorenzo, the player seen as a cheaper alternative to long-time target Kieran Trippier.

The Red Devils have long been linked with a move for a new right-sided full-back, as Ole Gunnar Solkjaer looks to provide cover and competition for current regular starter, Aaron Wan-Bissaka.

The 22-year-old was almost an everpresent last term due to his form but also a lack of other options, featuring 54 times in all competitions to take his total United tally to 100 appearances in just two seasons, having joined the club on a £50m deal from Crystal Palace in 2019.

With Diogo Dalot out on-loan at AC Milan, the Englishman’s only real back-up was that of Brandon Williams – who can also play at left-back – yet it would seem the academy product is in need of a temporary switch to secure regular game time away from the club.

Kieran Trippier has been heavily linked with being the man to provide depth at right-back, though the Star are reporting that the club are considering a move for a cheaper alternative in the form of Italy defender, Giovanni Di Lorenzo.

The 27-year-old has caught the eye with a string of impressive displays under Roberto Mancini at Euro 2020, after coming in for the injured Alessandro Florenzi in the opening game.

The Napoli man has also been a reliable force at club level, having featured 95 times over the last two campaigns in all competitions, following his move from fellow Serie A side Empoli in 2019.

The report suggests that the full-back – who is said to be valued in the region of £17m – is viewed as a viable alternative to England defender Trippier, who is unlikely to be willingly sold by current club Atletico Madrid.

The 30-year-old has become a key player under Diego Simeone since making the switch from Tottenham Hotspur in 2019, going on to feature heavily en route to the club’s La Liga title triumph last term.

A return to the Premier League to link up with United as has been mooted for the player – who began his career at rivals Manchester City – although the Red Devils are seemingly unwilling to fork out more than £20m for his services, while Atletico are said to want almost twice that.

The versatile full-back has been a valuable member of Gareth Southgate’s England squad in recent years, playing a pivotal role at the 2018 World Cup, while he’s since made a handful of appearances at Euro 2020.