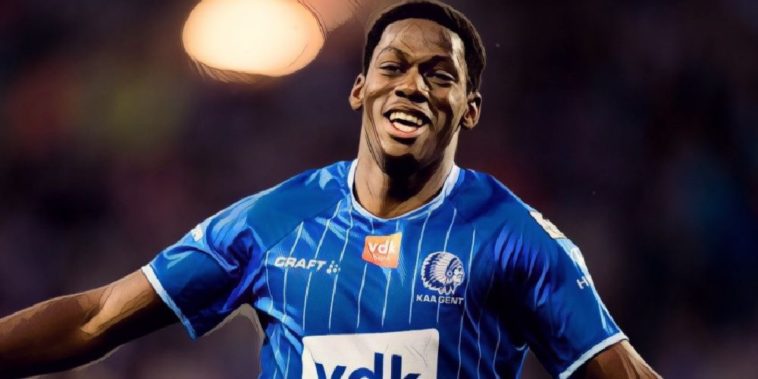 Jonathan David has been warned against making ‘a step too big’ as Premier League giants continue to circle the highly-rated Gent forward.

The Canadian forward is regarded as one of the most promising talents in Belgian football following a prolific season for Gent thus far, the 20-year-old scoring 22 goals in all competitions this season including a hat-trick in last weekend’s win over St Truiden.

Manchester United, Arsenal and Everton have all been linked with moves for the promising forward, with the Mail reporting that Ole Gunnar Solskjaer’s side will send scouts to further monitor his progress against Roma in the Europa League tomorrow night.

Portuguese giants Porto are also interested and saw a big of £5m immediately rejected during the January transfer window, and whilst the player’s agent, Nick Mavromaras, says David is ready for a move, he has warned his client that a move to a top club could be ‘too big’ at this stage of his career.

“Without a doubt: Jonathan is ready for the next step,” Mavromaras told Het Laatste Nieuws.

“Gent has boosted his career, the club did a lot for him. I understand that they would like to keep him longer, but Jonathan wants to go ahead.

“The Belgian league is fantastic for young players, but the moment for the next step arrives and this will come in the summer.”

“His final target is to play for one of the five best clubs in the world,” he added. “But for now, we have to stay humble.

“The next step in his career can’t be too big. For example, Arsenal. There we speak about the top five in the Premier League.

“The next step has to be an intelligent one. There, this would possibly be a step too big at the moment. The whole package has to be right. An intermediate step can be better sometimes.”

The US-born Canadian moved to Gent from Ottawa Internationals in 2018 and has developed into a hugely promising talent, while the versatile forward has also impressed on the senior international stage, scoring 11 goals in just 12 appearances for Canada.