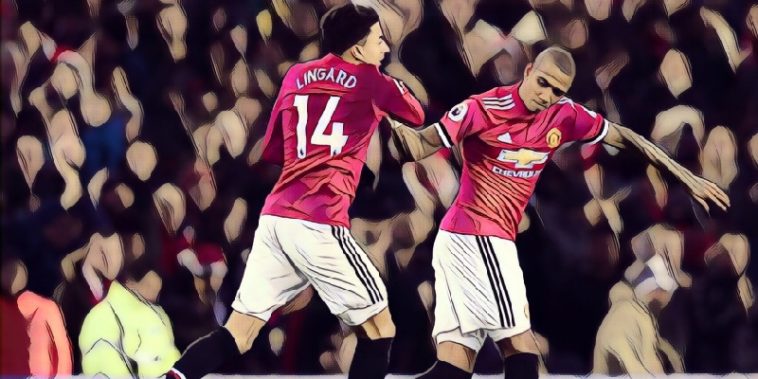 Jesse Lingard came off the bench to grab a brace, including a late equaliser to rescue a point for United at home to Burnley.

Burnley got off to a dream start, with Ashley Barnes lashing home from close range with only two minutes on the clock. A little over half an hour later, Steven Defour curled a fantastic free-kick home from 30 yards out, sending the Clarets into halftime with a 2-0 lead. At the break, Mourinho made two changes, bringing on Lingard and Henrikh Mkhitaryan for Zlatan Ibrahimovic and Marcos Rojo. Lingard pulled one back with a lovely backheeled finish, and as United piled on the pressure in injury time; he came good once again to grab a point for the Red Devils.

Dyche continues to work his magic

If it were not for a certain Spaniard managing Man City, Sean Dyche would be the runaway favourite for Manager of the Season. The Englishman has worked wonders on a budget with Burnley. Their away record in the Premier League going into this game read: four wins, three draws and two losses. This is a huge improvement on last season, where they only won one game away from Turf Moor.

Another positive result away from home was built on taking what few chances they got, and weathering the waves of United attacks in the second half. Dyche will be disappointed with the nature of the equaliser, but his team currently sit in seventh place, just four points behind Spurs in fourth. Things are looking good going into 2018.

Jesse Lingard is on an excellent run of form. He now has a career high six league goals this season, and his presence in the second half completely changed the flow of the game. He should have scored from four yards early in the second half, but made up for his miss with a cheeky backheel, and a composed late equaliser.

His ‘Energizer bunny’ levels of energy made life difficult for the Burnley backline, forcing them into rushed clearances. This then led to the mounting pressure from United’s forwards, and of course the two goals. Surely, at this point he has to be an automatic starter for Mourinho’s side.

Ibra and Lukaku together doesn’t work

Before Lingard was brought on, Mourinho decided to start the game with his two big name strikers for the first time. Romelu Lukaku and Zlatan Ibrahimovic lined up the next to each other, and on paper, it looked a daunting task for Burnley’s backline.

However, in practice, the two did not dovetail. The failed to fashion a true goalscoring chance between the two of them, and it seems that Lukaku benefits more from having Marcus Rashford or Anthony Martial up top. The younger, quicker forwards allow Lukaku to hold the ball up, and play it off to them, whereas Ibra’s style is just too similar. Both big men are volume strikers; they tend to take a lot of shots for their goals. Playing them together does not seem to work for the Red Devils.

Back to the training ground for crosses

The big men up top were not helped by the poor quality of United’s crossing today. With giants like Lukaku, Ibra, Paul Pogba, Phil Jones and Nemanja Matic sniffing around the box from set-pieces, one would expect United to be dominant. Instead, cross after cross was either under or overhit. Ashley Young aside, the quality of the balls was appalling, and Mourinho needs to ensure such form does not continue into the New Year. It is a horrendous waste of a natural physical advantage, and could have turned this draw into a win.

Rojo is a liability at centre-back

Another game, another yellow card for the Argentine defender. That makes it five in five games, and lands him a one-match suspension. This time, Rojo’s card came for a foul inside two minutes, and led to Burnley’s opening goal. He excellent on the ball, but too often he dives into silly challenges he does not need to make.

It was telling that Mourinho decided to substitute him at half time. With United’s injury problems at the heart of defence, Rojo had a chance to play himself into a regular first-team slot. Victor Lindelof will get a chance in the next game, and Mourinho can only hope he does better than Rojo did today.