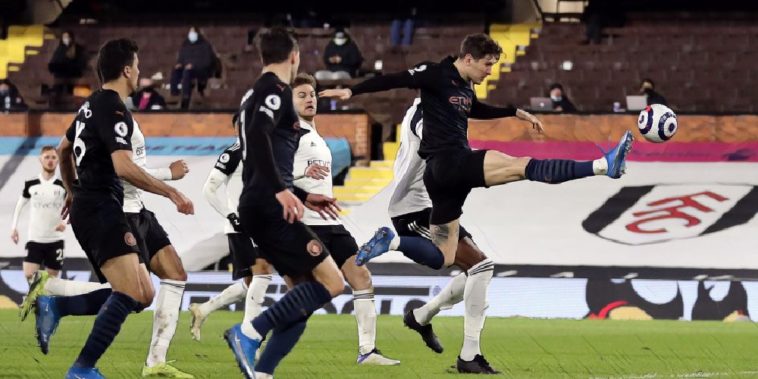 Both sides played some positive football in the early stages, with Man City looking a particular threat down the right, with Bernardo Silva and Ferran Torres getting into some dangerous spaces.

After their poor start to the season, Fulham have improved dramatically in the last few months – keeping five clean sheets in their last seven outings – and showed some excellent defensive resilience to keep the league leaders at bay for the first 45.

However, that resilience didn’t last long, City exploiting Fulham’s high defensive line from a Joao Cancelo free kick with John Stones netting his fifth goal of the season just 76 seconds after the restart.

Two quickly became three as former Man City defender Tosin Adarabioyo brought down Torres in the area, leaving Sergio Aguero to step up and despatch from the resulting spot-kick, his first Premier League goal in 14 months.

Pep Guardiola’s side comfortably saw out the rest of the game to move 17 points clear of Manchester United, though they have two games in hand, and speaking afterwards, the City boss

“A great performance against a team like this who are so physical and have good ideas,” he told BT Sport. “It was an important victory for us. Eight games left and we are closer [to the title].

“Our pressing for the second and third goal… It was so difficult and we make a good game.

“Of course. The dynamic of the season is good. We didn’t concede so that’s good. So satisfying. Now we have two finals in the Champions League and the FA Cup.

“It was important for him [Sergio Aguero]. To score goals is everything for him and Gabriel [Jesus] as well. All the team was brilliant.

Next up for City is their Champions League last 16 second leg against Borussia Monchengladbach before they take on Everton in the FA Cup quarter final.

Premier League hopeful of having 10,000 fans at final two games of the season