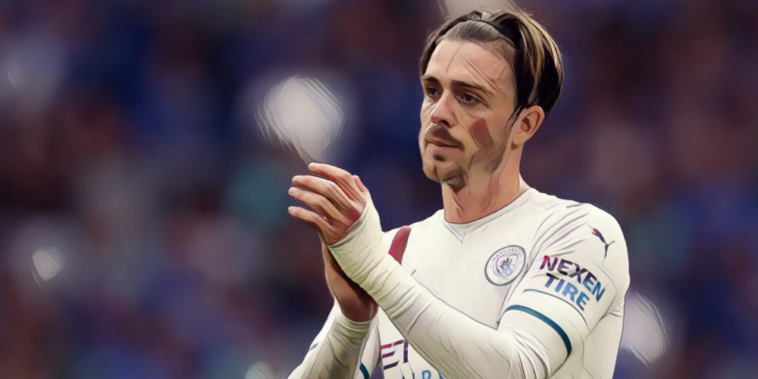 Jack Grealish insists he does not feel the pressure of his record-breaking £100m price tag as he looks to go to the ‘next level’ at Manchester City.

Grealish became the most expensive player in Premier League history after leaving Aston Villa for the Etihad last week, the midfielder becoming the first £100m player in English football.

The 25-year-old is now relishing the chance to test himself at the highest level after leaving Villa, and insists he feels no added pressure given his record price-tag, believing the fee is a testament to the faith City have in his ability.

“It puts no pressure on me whatsoever,” he said at his first press conference since arriving from Aston Villa. “I take that as a compliment. I actually like it, it’s a good tag to have. I think when you see a club paying that much for a player it means they trust you and value you highly and see so much potential there to work with.

“I just see it as a good thing. Now I just hope I can repay this whole club by winning as many titles as possible and winning that trophy [the Champions League] we all want.

“It [the fee] probably hasn’t sunk in yet but it means so much to me that the club were willing to spend that much on me. If anything it just fills me with confidence. I don’t think there’s any pressure on that price tag at all – it shows how much the club and the manager value me and that only gives me confidence going forward.”

Grealish also discussed his potential role in the squad after joining an abundance of attacking options available to Pep Guardiola this season, with the midfielder set to face competition from the likes of Riyad Mahrez and England teammates Raheem Sterling and Phil Foden.

The marquee arrival believes he is ‘different’ to every other player in City’s squad however, and believes working under Guardiola can help take his game to the ‘next level’.

“I think I’m different to every player in this squad,” he said. “Raheem [Sterling] is a winger that likes to run in behind, Riyad [Mahrez] is an out and out dribbler, Phil [Foden] has a bit of everything. I feel like I can bring a lot to the team. That’s what the manager has brought me here for.

“He’s said I can play in a number of positions. Whether I’m a winger or an 8 or a 10 or even a false nine, I feel I can bring a lot. When I watch City there’s so much attacking talent that can do everything. They’re changing positions constantly, which is obviously difficult for defenders.

“Even the few days I’ve been here, the manager’s only had two sessions with myself but it’s just crazy to see him work the way he does. It’s no surprise why he’s been so successful in his whole career because some of the tactics he has are out of this world. I wouldn’t even think of it but when you start working with him you see why he is as successful as he is.

“You’ve seen what he’s done with players here, the likes of Raheem and Phil especially. I think a few years back people were saying about Phil going on loan but he kept him around and has transformed him easily into one of the best talents in the world.

“Everyone knows what he’s done with Raheem who is one of the best wingers in the world as well now. I feel like he can take my game to the next level.”