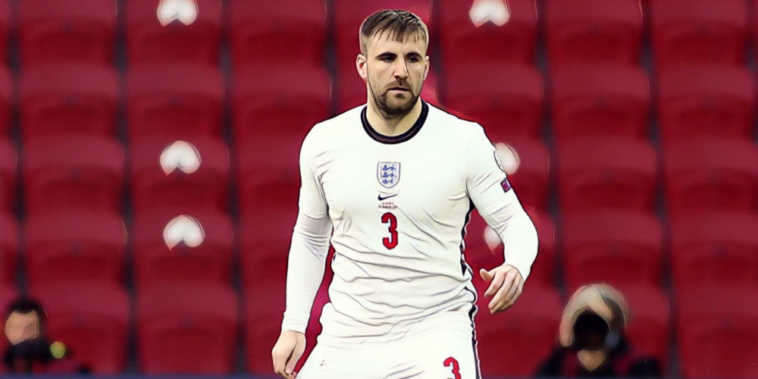 Luke Shaw says Jose Mourinho needs to stop ‘going on’ about him following the latest criticism from the former Manchester United manager.

Mourinho and Shaw endured a difficult relationship during the former’s spell in charge of the Red Devils, with the left-back a target for regular – and often public – criticism and struggling to convince the manager of his capabilities.

The 25-year-old has since flourished in the two-and-a-half years since Mourinho’s exit from Old Trafford, though could not escape new criticism from his former boss following England’s 1-0 win over the Czech Republic at Euro 2020.

“The service was dramatically bad,” Mourinho said following the win over Czech Republic. “They have so many good players to attack corners. The crosses are not passing the first man.

“Luke Shaw, in my opinion, very good tonight but very poor on the corner. Phillips, the same.

“England has great power at this level and going to knockouts, one corner can decide a game.”

Shaw has now opened up on Mourinho’s comments and admits he is baffled by the Portuguese’s continued negative opinion on him, defending his performance against the Czech Republic and admitting his focus is only on the thoughts of England boss Gareth Southgate.

“I don’t really understand it, to be honest,” Shaw told the Press Association. “I don’t know why he is still going on and wanting to point at me. I don’t feel like the set-pieces were as bad as he was saying.

“I might have done one in the second half, a corner, that didn’t get over the first man. But that was one out of three. The other two or three, I don’t think, were as ‘dramatically bad’ as he says.

“Look, he has got to do his job. He has got his opinion. I am used to him saying negative stuff about me now, so I just pass it by. I leave it be, I ignore it. I just focus on what the coaching staff say here, what Gareth says and that’s that, really.

“His voice is obviously very big. He likes to talk a lot about me, as everyone has seen recently. But his voice is his own. He can say what he wants.

“I will focus on myself. I take set-pieces at United, so it wasn’t as if it was something I wasn’t ready for.”

Shaw discussed the difficult relationship he shared with Mourinho during their time together at Manchester United, insisting ‘there is no hiding’ the fact the duo ‘didn’t get on’.

The defender admits he finds Mourinho’s constant comments on his game ‘strange’ and says even his teammates have noticed how he is often unfairly targeted by the former United manager.

“There is no hiding that we didn’t get on,” he added.

“I think he was a brilliant manager but, you know, the past is the past. It is time to move on. I am trying to move on but, obviously, he can’t.

“He continuously talks about me, which I find quite strange. Even some of the lads have said ‘what’s his problem?’ and ‘why does he keep talking?’

“He just needs to move on. Hopefully he can find his peace with that and finally move on and stop worrying about me. Clearly I am in his head a lot and he clearly thinks about me a lot.”

Asked if he can now laugh off any fresh criticism, Shaw added: “Yes, because I don’t think any of you realise the two or three years I had with him and how bad it was then, what it was like then.

“What he says now is nothing compared to how it used to be. I am being totally honest. I am so past it now. I have grown up a lot.

“The three years I had with him, I learnt a lot. I find it easy to ignore him now and even laugh about it. But it’s better just to ignore it and move on with my life.”