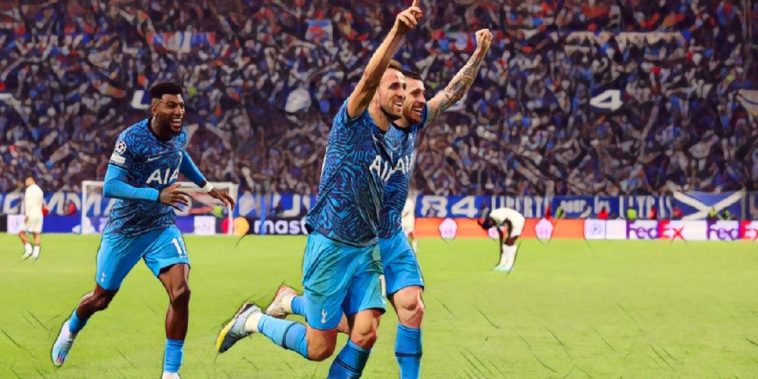 Tottenham Hotspur came from behind to bag a last minute winner to book their place in the Champions League knockout stages against Marseille.

Group D was one of the most wide-open groups coming into the final matchday, with all four sides knowing they could still progress to the knockout stages. Spurs knew a point would secure their progress, while Marseille needed a victory to book their place in the last 16.

With that in mind, the French side started by far the brightest at the Stade Velodrome, and their hopes were boosted before the hour mark as Heung Min Son was forced to be withdrawn following a blow to the head.

Marseille – who have a number of players with Arsenal links within their ranks – continued their dominance throughout the half, and took the lead in the second minute of first-half stoppage time. Spurs were caught napping as Marseille played a short corner, with Chancel Mbemba rising unopposed at the back post to head past Hugo Lloris.

Spurs had been so poor in the first half, but came out with more purpose after the break, and nine minutes into the second half, the Premier League outfit hauled themselves back level to put themselves provisionally in second place in the Group D table, Clement Lenglet rising highest to head home a free-kick.

With 10 minutes to play, Pierre-Emile Hojbjerg smashed an absolute thunderbolt against the bar, while one of Marseille’s former Arsenal contingent, Sead Kolasinac, squandered a free header at the back post as both sides looked to grab a winner.

With the very last kick of the game, though, Spurs did bag a winner to put them through to the last 16 as Group winners, Harry Kane slipping the ball into the path of Hojbjerg who broke away and lashed past Pau Lopez from the edge of the box to dump Marseille out of Europe altogether.

What a turn-around!! 💫#UCL pic.twitter.com/PBITDlh9js

Speaking after the game, Spurs captain Hugo Lloris – who was named man of the match – praised his side’s personality to come from behind to claim top spot.

“To be honest, we expected that type of game. It was a very difficult place to deal with and I think we showed great personality,” he told BT Sport.

“In the second half we had a good game and Clement Lenglet scored an important goal in France in front of the French people and Pierre-Emile Hojbjerg is so important to confirm that top of the group.

“It was a tough night, a great battle and even more psychological battle because we could feel in the first half a team was playing without the fear to lose, it was Marseille, and in the second half we had a team that was fearing to lose and it was us.

“Also I believe that when we had to face difficulties, we showed great personality and it’s a great result.

“Without our coach it was even more difficult for him in the stand and it’s a great winning team – that’s the most important thing.”