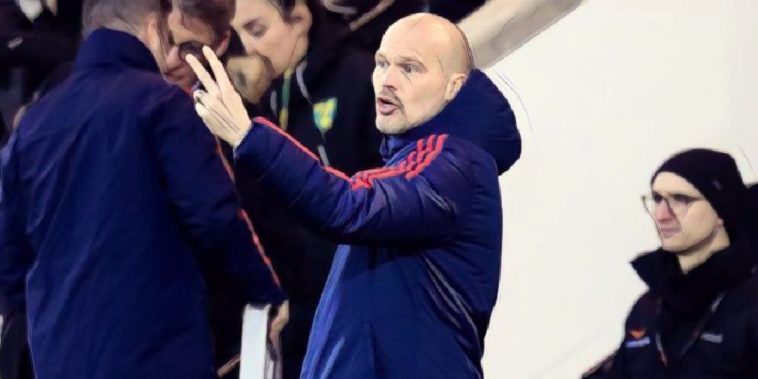 Freddie Ljungberg has laughed off criticism from Paul Scholes over his touchline attire, sarcastically remarking that his suit was ‘at the dry cleaners’ ahead of his first game as Arsenal’s interim manager last Sunday.

Ljungberg took charge of the North London side for the first time in Sunday’s draw at Norwich, though while most pundits critiqued Arsenal‘s performance on the pitch, former England midfielder Scholes made the bizarre criticism of the Swede’s decision to wear a tracksuit during his debut appearance on the touchline.

Speaking following the clash at Carrow Road, Scholes said: “You would think he’d be out in a suit to show a bit of proudness that he took the job.

“To me that’s a great start – shirt and tie to show some discipline.”

"The suit was at the dry cleaners…" 👔

Freddie Ljungberg responds to Paul Scholes who questioned his attire during Arsenal's draw with Norwich!

Ljungberg has now responded to the remarks, admitting the topic of his clothing in the dugout is ‘extremely important’ and joking he will consider his fashion options ahead of Thursday night’s meeting with Brighton at the Emirates.

“That’s extremely important. It happened so quickly that the suit was at the dry cleaners and I couldn’t get it ready,” Ljungberg said at his pre-match press conference.

“I’ve seen coaches with a tracksuit, suit and sweater and I’ll decide on matchday what I will where. I haven’t been fitted for a club suit but you will know what I will use.”

Arsenal currently sit eighth in the Premier League and host Brighton looking to end a run of eight fixtures without a win in all competitions. Graham Potter’s side will also be looking to bounce back from a recent wobble, having lost three successive league games.

See also – The best Premier League stats from Gameweek 14: History is not on Man City’s side