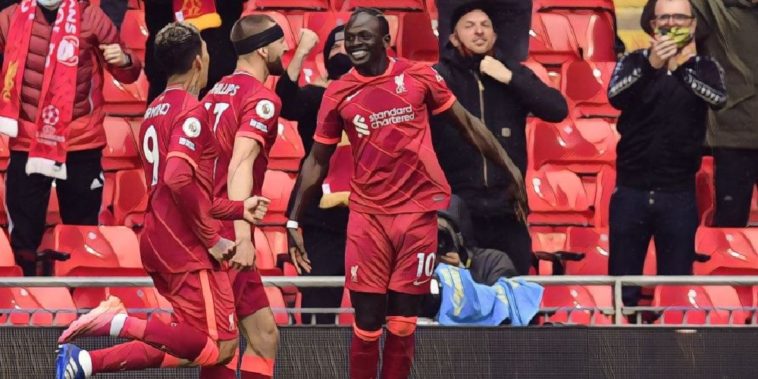 An unbeaten Liverpool host Crystal Palace on Saturday afternoon, the two sides having previously met on the final day of last season.

Here’s all you need to know about that upcoming encounter at Anfield.

The only real negative in an otherwise positive week for Liverpool was the horrific injury to fledgling star Harvey Elliott in the win over Leeds United on Sunday, the 18-year-old looking set to miss a fair chunk of the season after being forced off following Pascal Struijk’s challenge, which ultimately saw the central defender sent off.

The Reds were already two goals to the good prior to that incident, with Mohamed Salah netting the 100th Premier League goal of his career to put his side ahead inside 20 minutes, before second-half goals from Fabinho and Sadio Mane either side of the sending off secured a 3-0 victory to extend the Merseyside club’s unbeaten run.

Despite the eventual comfortable scoreline, the first hour had been a real battle against Marcelo Bielsa’s side, although the sheer quality of the visitors eventually shone through, with Salah once again the spearhead of a frightening attack at Elland Road.

It was one enthralling encounter to another as Jurgen Klopp’s men then took on AC Milan in the Champions League on Wednesday night at Anfield, the two sides having famously met in the competition’s showpiece in both 2005 and 2007.

While it may not quite have been the drama of that night in Istanbul, the clash certainly lived up to the hype, with the Serie A side netting twice in quick succession to take in a 2-1 lead at the break after Fikayo Tomori’s early own goal, before goals from Salah and a stunning Jordan Henderson effort flipped the tie on its head to ensure a 3-2 win for the home side.

Klopp had opted to rest both Mane and Virgil Van Dijk for the midweek meeting, although both men are likely to come back in this weekend, with the latter man’s absence keenly felt against Milan.

The providers of one of the shocks of the weekend, Crystal Palace secured their first league win of the season – and first of the Patrick Vieira reign – with an impressive victory over 10-man Tottenham Hotspur on Saturday afternoon.

Spurs had gone into the game with a perfect start to the new campaign with three wins from three to sit at the top of the league, yet they were simply outplayed by a dominant Palace side at Selhurst Park, lead superbly by the mercurial Wilfried Zaha.

The former Manchester United man fired the hosts ahead from the penalty spot with 15 minutes to go following a Ben Davies handball, with the visitors having already seen Japhet Tanganga handed his marching orders after two rash yellow card offences.

That lead was then extended in the closing stages through substitute debutant Odsonne Edouard, the summer signing from Celtic firing in just seconds after coming off the bench, before he capped his fine cameo with a second in stoppage time to secure a superb 3-0 win.

That result moved Palace up to 11th with five points from their opening four games, with the arrivals of Joachim Andersen, Marc Guehi and on-loan Chelsea midfielder Conor Gallagher already looking like astute pieces of business.

As for this weekend’s trip to Anfield, Edouard could well be handed his first start, while fellow summer arrival Will Hughes is also in contention after being an unused substitute against Spurs. Highly-rated youngster Eberechi Eze remains a long-term absentee.

The two sides last meeting came on the final day of last season, with the result confirming a previously unlikely third-place finish and Champions League qualification for the hosts.

Having recovered from their wretched form at the start of 2021, the Reds went into the match in fine form after four successive league victories and looked out to spoil the party on what was Roy Hodgson’s final game in charge of the visitors.

Despite a somewhat nervy start from Jurgen Klopp’s side, they soon found their stride to take a deserved lead on 36 minutes as Sadio Mane bundled home, before the Senegal international added a second late on in the second half to secure the win.

That triumph ensured an eighth successive win for Liverpool against the South London side, with the reverse fixture having seen them romp to 7-0 victory at Selhurst Park.

What channel is Liverpool v Crystal Palace on?

Irish readers can watch the match on Premier Sports, though the game is not available to watch or stream in the UK.