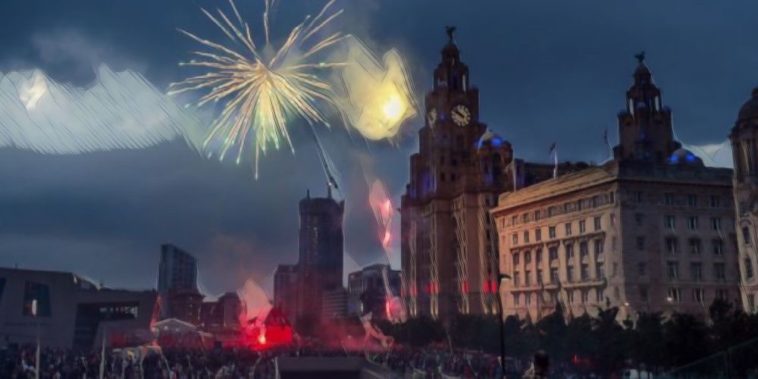 Liverpool Football Club have condemned the behaviour of a number of their supporters following scenes in Liverpool city centre to celebrate the club’s title win.

During football’s Coronavirus enforced shutdown, Mayor of Liverpool Joe Anderson had expressed his concerns about playing out the remainder the season amid concerns that fans would congregate to celebrate what was an inevitable title victory.

At the time, Liverpool said that they were ‘disappointed’ by Anderson’s comments, while Supporters group Spirit of Shankly said there was ‘no evidence’ that Reds fans would ignore the country’s social distancing protocols.

However, as the Merseyside outfit were finally crowned champions of England on Thursday night, that is exactly what happened.

Man City’s defeat to Chelsea prompted thousands of fans to gather outside Anfield to celebrate the clubs first league title in 30 years, with a further gathering happening on Friday night by the City’s Pier Head.

However, videos from Friday’s gathering showed Liverpool fans firing rockets towards the City’s iconic Liver Building, a building which is partly owned by Everton owner, Farhad Moshiri, the building being illuminated in both Red and Blue.

You couldn’t make it up…

Aiming fireworks and setting fire to the Liver Building because it’s lit up blue. That’s the same building that’s used for the crest on the club they’re celebrating 🤷🏽‍♂️ pic.twitter.com/QLw6h69tfS

Firefighters had to attend the scene after a piece of astroturf outside the building caught fire, with police now being granted emergency powers to disperse further gatherings over the weekend.

Alongside the City Council, the Police, and the aforementioned fan group, Liverpool have now released a strongly worded condemnation of the scenes within the city, reminding fans that such gatherings increase the ‘potential danger of a second peak of COVID-19’ within the city, which was already been ‘disproportionately affected’ by the pandemic.

“Throughout the last week, Liverpool Football Club, Merseyside Police, Liverpool City Council and Spirit of Shankly have worked together to consistently remind people that the region is still disproportionately affected by the COVID-19 pandemic and ask people to celebrate LFC’s Premier League title win safely,” a joint statement reads.

“Several thousand people turned up at the Pier Head on Friday June 26 and some chose to ignore the social distancing guidance and risk public safety.

“Our city is still in a public health crisis and this behaviour is wholly unacceptable.

The cleanup operation is already underway after a number of Liverpool fans gathered at Pier Head to celebrate @LFC winning the league. @MerseyPolice have put a dispersal order in place until 28th June. pic.twitter.com/VX7kQ0sbCs

“The potential danger of a second peak of COVID-19 still exists and we need to work together to make sure we don’t undo everything that has been achieved as a region during lockdown.

“When it is safe to do so, we will all work together to arrange a victory parade when everyone can come together to celebrate. Until that time, the safety of our city and our people continues to be our number one priority.”