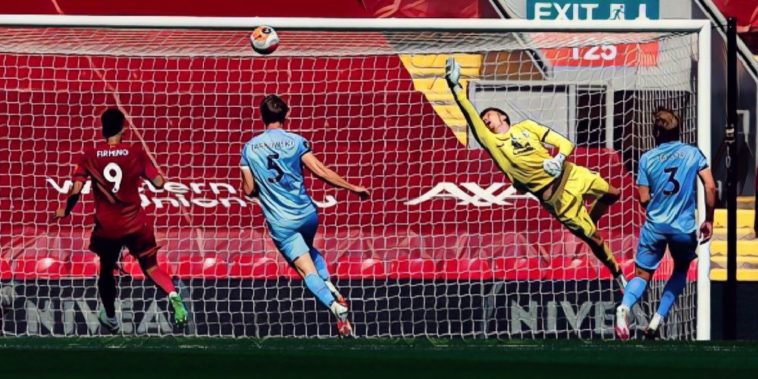 Liverpool’s long winning run at Anfield came to an end with a 1-1 draw against a battling Burnley today.

The newly crowned Champions had won the previous 24 Premier League games at their famous old stadium, a run stretching back to January 2019, and when Andy Robertson guided a superb header into the top corner in the 34th minute, you would have been forgiven for assuming win number 25 was on its way.

However, despite incessant pressure from the hosts, Burnley held firm and managed to pull level, Jay Rodriguez’s picking up a James Tarkowski knockdown, before smartly finishing past Alisson into the bottom left corner in the 69th minute.

Liverpool peppered the Clarets goal throughout the game but were unable to find a breakthrough, England ‘keeper and current golden glove leader Nick Pope in inspired form throughout, and Jurgen Klopp was critical of his side’s inability to finish their abundance of chances.

“It was a really good game but we left the door open for Burnley and we should have closed it,” he told BT Sport.

“We should have scored two, three or four goals at least. The referee let lots of challenges go so it was clear that if the ball comes into the box it was dangerous. They did what they are good at and I respect that.

“Of course it is frustrating, we should have scored much earlier. We warmed Nick Pope up and at the end he was properly really warm, he made some sensational saves.

“It’s our fault because we should have closed the game but we didn’t do. Burnley is a team who stay in the game and they have two top strikers who constantly go for each ball. It’s an intense period and at the end we were pushing up and they are always dangerous. That’s why you have to take your chances.

“But we stand here with only one point and that is not exactly what we wanted.”

The point leaves Liverpool on 93 points with three games to play, meaning they still have the chance to break the Premier League record of 100 points.

Will Thiago be next? Rating the players to play under both Guardiola and Klopp

See also – Ranking every member of the Champions League ‘100’ club