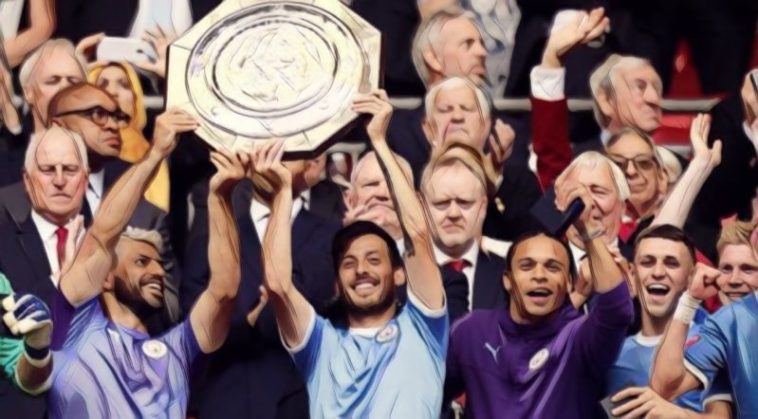 Manchester City won the Community Shield for the second successive season after beating Liverpool 5-4 on penalties after an entertaining affair at Wembley earlier today.

Despite both Pep Guardiola and Jurgen Klopp downplaying the importance of the seasons traditional curtain-raiser, judging by how animated both coaches were on the sidelines and how much Man City celebrated their triumph, this was very much a game both sides wanted to win.

So without any further ado, let’s see how the players rated…

A superb showing from the much-maligned goalkeeper. Made a host of smart stops and his distribution was world class at times, particularly during the first period. Capped it all off by making the decisive save from Wijnaldum’s penalty in the shoot out.

Won his duel with Origi and burst forward brilliantly at times, made an amazingly acrobatic goal line clearance in the dying moments to keep his side in the game.

Needed a big performance after his horror show for England in the Nations League and he got it. Excellent in possession and defended well throughout.

A really solid performance by the Argnetine defender, up until the final minutes that is, when a bad mistake allowed Salah in and almost cost his side the game.

Predictably roasted by Salah on a few occasions, but stuck to his task well and his accurate passing helped his side going forward.

Cut a frustrated figure at times during the first half after failing to make the most of getting in behind Liverpool’s defence. However, the brilliant Belgian grew into the game and seemed to up his level after being handed the captains armband after Silva’s exit.

Had a couple of hairy moments when he was caught out by the pace of the game, but all-in-all a decent first outing in English football from Man City’s record signing.

A relatively quiet afternoon for the little magician, but it was his intelligent flick that set up Sterling for the opener.

A typically indusrious and skillful display by the Portuguese playmaker, who enjoyed an entertaining battle with Liverpool left-back Robinson throughout.

A day in which we saw the two sides of the City attacker. His movement had the Liverpool defence at sixes and sevens at times and scored the opener from close range. However, he made a hash of a one-on-one in the second period that would have surely sealed the game for City.

Had Alexander-Arnold on toast, but injury ended his day after just 13 minutes.

Put himself about and linked the play well after his introduction. Calmly slotted home the winning penalty in the shoot out.

Sloppy in possessions several times after his introduction, and will have to be better once the season begins.

No impact on the actual game, but stroked home his penalty nicely.

Had no chance with the goal and kept his side in it on a few occasions with solid stops.

A wonderfully gifted footballer, but today was a day when his lack of defensive awareness was exposed time and time again. Teams will continue the target the right back and Jurgen Klopp will need to work closely with the England international, as being consistently caught out by long balls from the opposition ‘keeper is simply unacceptable at this level.

Used his pace to get him out of trouble on a few occassions, but all-in-all there is no dressing it up, this was a below-par display by the youngster, who struggled with Sterling’s movement all day.

Didn’t do anything wrong per se but nowhere near as imperious in defence as we have become accustomed to. Set up the equaliser with a wonderfully deft volleyed cross.

Caught out of position a couple of times early on, but recovered well and as mentioned his battle with Bernardo Silva was great to watch.

As always he very rarely coughed up possession, but was part of a midfield three that struggled to lay a glove on City during the first half. The Dutchman was the unlucky player to miss a penalty in the shoot out, seeing his tame effort saved by Bravo.

Recovered from a lacklustre first-half showing to really start to influence the game during the second period.

It’s on days like today when the Reds skippers critics will question what he actually brings to the table apart from work-rate and constantly being in the refs ear.

On the positive side, Liverpool fans will be happy to see that Salah doesn’t look too far off the pace after next to no pre-season, although on the flip side the Egyptian King really should have scored at least one of the 427 shots he took at Bravo’s goal.

Looked really sharp and went close with one superb individual effort early on.

Worked hard, but got little change out of Walker down Liverpool’s left. Sadio Mane won’t be too worried about his starting spot after this showing.

Scored the equaliser and considering Liverpool looked more assured at the back after his second half introduction, this was a good day on a personal level for the lanky centre-back.

Brought some much needed energy to the Reds midfield, without ever really looking like creating too much in the attacking third.

Neat and tidy during his cameo.

Unable to make much of an impact, although he absolutely smashed his pen top bins.

Read: Five of the best games between Klopp and Guardiola sides