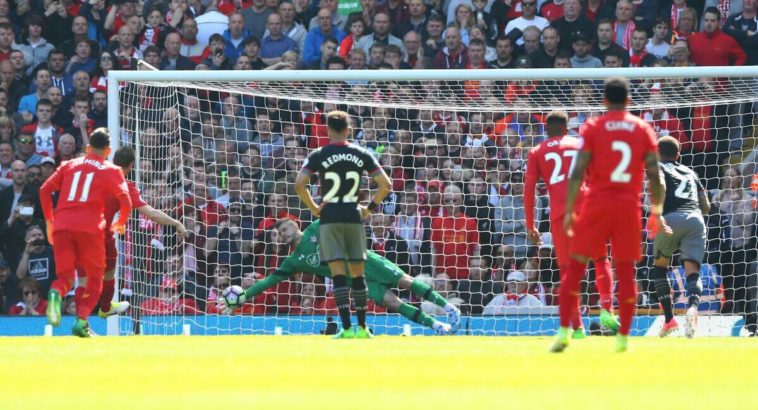 Liverpool needed a win to ensure they get Champions League football but once again they failed to overcome a magnificent Southampton defence.

Jürgen Klopp named an unchanged team for this game as Lallana and Sturridge both had to settle for a place on the bench. Coutinho recovered from a dead leg suffered against Watford so he went straight back in to the side.

There was only one change for Southampton as Ward-Prowse came in for Redmond in a tactical change. Stephens also made his 100th career appearance.

The game’s first chance came 15 minutes in as Firmino won the ball from Romeu. Firmino tried a curling shot from the edge of the box but it was blocked by Yoshida.

With Southampton playing deep to limit Liverpool’s chances the next chance didn’t fall until the 35th minute. Firmino once again with the effort but it was a weak shot from distance which Forster saved comfortably.

In an uneventful first half both teams ended it carelessly as the ball was consistently given away.

The second half began as unexciting as the first but in the 65th minute Liverpool had the chance to put themselves in front.

Lucas lifted the ball in to the box which Stephens hand balled in his attempts to clear. James Milner stepped up to take the resulting penalty but it was a fantastic save from Forster to deny him.

Shortly after the penalty both teams made offensive changes as Long replaced Gabbiadini for Southampton whilst Lallana & Sturridge came on for Lucas and Origi.

The game was much better for the changes as Sturridge was able to craft a great opportunity for himself. He managed to dribble around a compact Southampton defence to then fire an effort straight at Forster.

With Liverpool desperate for a late winner, Coutinho produced a brilliant header at goal in injury time but it was pushed over excellently from Forster. That was to be the last chance of the game as Liverpool once again failed to score against Southampton.

Southampton may not have created many chances in this game, if any, but Liverpool was equally as poor in front of goal. From the few chances Liverpool were able to muster they never really looked like beating Fraser Forster.

Of course it could have all been different had James Milner dispatched his penalty. Fraser Forster though fully deserved his clean sheet after pulling off a brilliant save to deny Milner.

Southampton are known for playing quick, passing football but in each of their four games against Liverpool this season they have adapted very well in order to deny Liverpool scoring. Liverpool on the other hand has done the opposite.

Jürgen Klopp’s persistence on his style of play has once again failed to function against a team that has sat deep. A Champions League place next season is under significant threat because of this.

Man of the Match: Fraser Forster