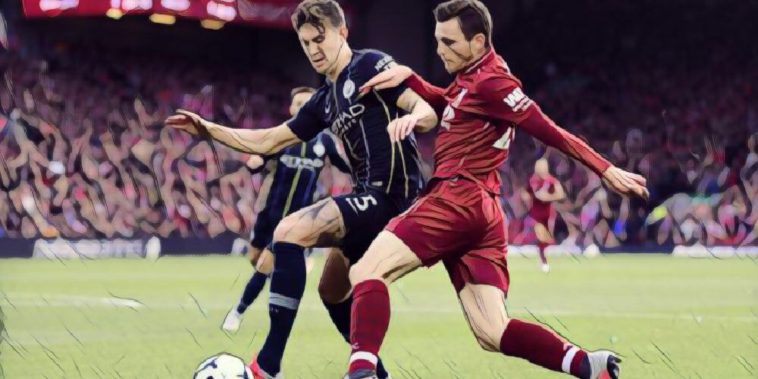 It was a surprise goalless draw at Anfield this evening as Liverpool and Man City cancel each other out as the two title favourites had to settle for a point apiece.

Here are five things we learned from the game.

This fixture has become well known for its abundance of goals. Two of the most attacking teams in the league usually go full throttle as they attempt to out-score each other. However, the two managers, Klopp and Guardiola, set their teams up in an unfamiliar style.

Probably in fear of the opposition, both teams played an uncharacteristically deep defensive line. For Liverpool that meant there was little space to counter and plays balls in behind. For City, it meant Agüero and David Silva were unable to get involved in the possession game which they usually love to do.

The result was a game that was almost entirely played in the middle of the pitch. The likes of Wijnaldum and Bernardo Silva flourished in this system though. With the defensive line so deep, it allowed the midfield players to get on the ball often and show what they had.

Jürgen Klopp named a surprise change to Liverpool’s usual starting line-up by selecting Dejan Lovren in defence and moving Joe Gomez to right back. It was a very odd decision considering Gomez and van Dijk have been an excellent centre-back pair. The decision looked even odder when Sané came on for City as Gomez struggled to cope in that position.

At times Lovren looked excellent for Liverpool as he quickly won back possession and played the ball forwards. However, on more than one occasion he looked clumsy when defending and could have given away a couple of penalties.

A clean sheet against Man City is obviously a good result for Lovren but he will be feeling a very relieved man. City were awarded one of three possible penalties and had the other been given, it would have put Lovren in a very difficult position.

After that performance, it would be a surprise to see Lovren back in the starting line-up after the international break. The frustrating thing for Liverpool though is that Lovren shows brief flashes of excellence but it is almost always compounded by a mistake.

A surprisingly English formation by Pep

Manchester City surprised many by lining up with a flat 4-4-2 as David Silva played alongside Agüero in attack. It was probably an attempt to prevent Liverpool marking Agüero out of the game which Liverpool have done very successfully in the past. Agüero has never scored a goal at Anfield.

The other possible reason for David Silva playing in attack is that Liverpool struggle to mark runners in behind. That is something that David Silva is excellent at as he drifts between the lines.

Liverpool’s inability to mark runners was evident when Sané came off the bench. The young German caused big problems for Liverpool as Joe Gomez was unsure of his positioning and Lovren was rash and inconsistent in protecting him.

In hindsight, Pep might see the formation as a mistake. Liverpool looked tame in attack and rarely threatened the City goal. Man City could probably have afforded to put more men further up the pitch.

Liverpool’s front three out of sorts

It’s been difficult to say exactly why but Liverpool’s front three has looked a shadow of what it was last season. A simple explanation would be that Mo Salah is struggling to recreate his phenomenal form from last season. However, it likely runs deeper than that.

A lot of the goals that were scored by Mané, Salah and Firmino last season came when they were playing very close together. Countless number of times they would play quick balls across the face of goal for a tap-in or pull it back to a free man.

Something that became apparent in this game against Manchester City though is that Mané and Salah’s positioning is very different to where you would expect them to be. Mané played very wide and rarely cut inside of Walker meanwhile Salah often played much deeper than expected. Salah did occasionally show up in positions he was found last season but nowhere near as regularly.

Virgil van Dijk has had plenty of time to settle into life at Liverpool and the result cannot be underestimated. In this fixture last season, Lovren played alongside Matip and for the majority of the game it felt like Liverpool were one mistake away from collapsing.

Comparing that defence to the one that played in this game is chalk and cheese. Virgil van Dijk gives Liverpool the confidence that they can count on the defence to keep clean sheets when they are struggling going forward.

Barring a very uncharacteristic foul in the box which resulted in a penalty the Dutchman was excellent. Liverpool splashing the cash on a new goalkeeper received the headlines but having van Dijk for a full season will make the bigger impact.