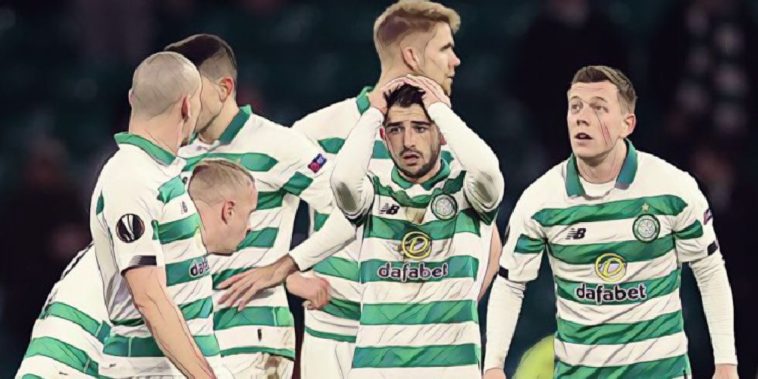 Neil Lennon says his players ‘let themselves down’ as Celtic were dumped out of the Europa League following a dramatic 3-1 home defeat to FC Copenhagen.

The Scottish champions headed into the second leg as favourites following an away draw in Denmark, but despite dominating during the first half would fall behind as some calamitous defending from Jozo Simunovic allowed substitute Santos to open the scoring.

Lennon’s side were handed a lifeline as Odsonne Edouard equalised from the penalty spot with just seven minutes remaining, however, with extra-time looming, Copenhagen would score twice on the counter-attack during the final five minutes to seal a 3-1 victory on the night and head into the last-16 4-2 on aggregate.

The Celtic boss struggled to hide his emotions following a ‘hugely disappointing’ night in Glasgow, the club missing a golden opportunity to join Old Firm rivals Rangers in the last-16 of European competition.

“I’m hugely disappointed because we basically shot ourselves in the foot,“ Lennon told BT Sport.

“We had total control in the first half, I don’t remember Fraser Forster having much to do. We had all the flow, we hit the post and had crosses going across the goal.

“We overplayed at the back and really should have gone back to the goalkeeper and reset. For some reason, we were getting pressed and played a loose ball in midfield, we were out of position and got punished for it. That’s not us.

“These players have been absolutely brilliant for me and I’m not going to sit here and criticise them for mistakes they made tonight. They deserved better but that’s football – it’s cruel sometimes.

“They are intelligent boys they know they have let themselves down a little bit. We’ve had a good Europa League run and I’m really disappointed it has ended.

“We did all the forcing, Copenhagen didn’t have to work hard for their goals. We gave them away cheaply.

“Even when the players were over for a drink during the VAR check, we told them it was definitely a penalty and if we score it, just stay solid and make sure it goes to extra time at least.”

See also – Tough nuts: Five of the hardest footballers to ever grace the British game