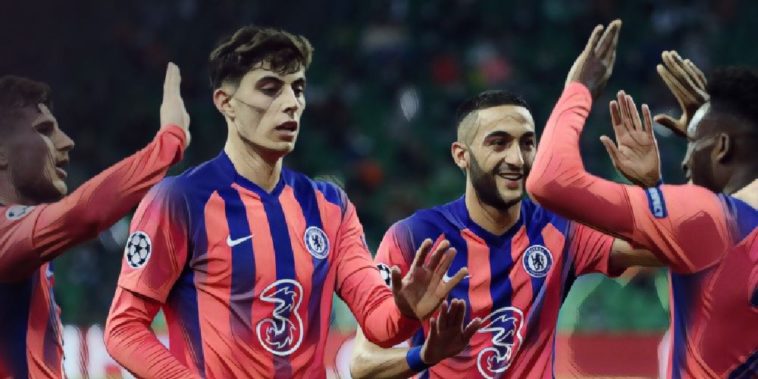 Frank Lampard hailed Hakim Ziyech after the Moroccan scored his first Chelsea goal in their 4-0 win over Krasnador in the Champions League on Wednesday night.

The Blues had recorded back-to-back goalless draws in the last week, yet quickly had a chance to take the lead after Timo Werner had been brought down in the box inside 13 minutes. The usually lethal Jorginho uncharacteristically squandered the spot-kick, however, as his effort struck the inside of the post before bouncing clear off ‘keeper Matvey Safonov.

The away side would soon find themselves ahead though as Callum Hudson-Odoi’s tame effort squirmed past Safonov who really should have done a whole lot better. Krasnodar almost grabbed an equaliser through Yuri Gazinsky, the midfielder’s headed effort striking the crossbar midway through the second period.

Despite looking lively the home side were soon two goals adrift, Timo Werner converting from the penalty spot after a perhaps harsh handball decision. The visitors added a third just three minutes later through Ziyech, the 27-year-old getting the goal his overall performance deserved to seal the win for his new club, while Christian Pulisic then added a late fourth to really put the icing on the cake for Lampard.

While a number of key men caught the eye, the Chelsea boss was particularly impressed with new man Ziyech on his first start for the club, the former Ajax playmaker looking to have put his injury woes behind him with an excellent display, despite having featured little since the Eredivisie was voided back in March.

“Hakim Ziyech has worked really hard to be fit, and I was very excited to get his quality in the team,” said Lampard at his post-match press conference.

“He brought a lot of quality and calmness when he was on the pitch, and got a well-deserved goal. His performance was very, very good when you consider he hasn’t started a match since March when the Dutch league finished.

“It’s been frustrating for him and for us his injury has meant he hasn’t been able to start, but what I’ve seen in training and what I knew we were signing is a player of immense quality with personality to receive the ball and find assists and goals. We saw a lot of glimpses of that today, and he will get better.

“We brought him in to do a job, maybe people have forgotten a bit because we signed him in January and he missed the start of the season, but tonight he showed he is here.”

Despite facing an uncertain future at the club over the summer, winger Hudson-Odoi took his chance after being handed a rare start, and Lampard was seemingly delighted with the level of competition developing in his forward ranks.

“Callum deserved a chance to play,” he added. “He’s trained very well recently, we have competition in those areas and we are also in the middle of a very busy patch of games. We need input from all the attacking players, and we had that today: Callum getting his goal, Hakim, Christian coming on for a goal. I was very pleased with those parts of our game.

“The goal is going to be good for his confidence. There were things I liked in his game: the desire to run behind the defence, sometimes one v one it didn’t go his way but when you play in the Champions League and you get that goal, I know the feeling of confidence it can give him.”

Chelsea are up against winless Burnley at Turf Moor in the Premier League on Saturday before hosting Rennes on Matchday three of the Champions League next week.