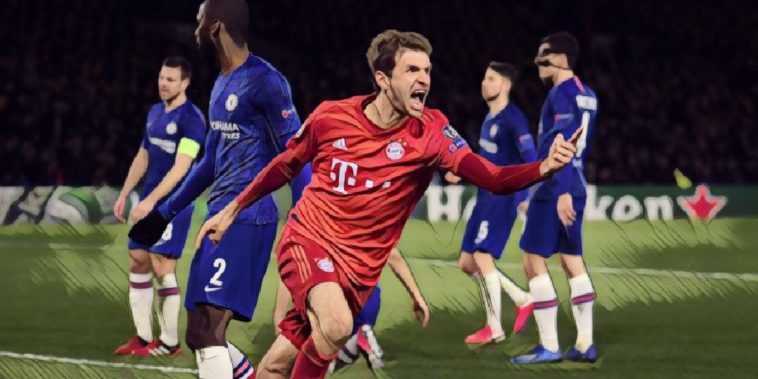 Frank Lampard has opened up on Chelsea’s progress this season and says the club were ‘put in our place’ following the club’s Champions League humiliation against Bayern Munich.

Chelsea have enjoyed a promising debut season under the guidance of novice manager Lampard and sit fourth in the Premier League ahead of a potential return to action, with the club having been widely praised for handing opportunities to several young talents during the current season.

Despite some encouraging performances, however, the west London side were ruthlessly exposed in their Champions League last-16 meeting with Bayern Munich, suffering a humbling 3-0 home defeat to the Bundesliga champions at Stamford Bridge.

Lampard has now reflected on his feelings following a chastening night in the capital, and hopes the loss can inspire his young side forward as they bid to improve and compete amongst Europe’s elite.

“I would like to think that Bayern Munich, we will look back on in one or two years time and it will be a defining moment for this group because it was a game that kind of put us in our place,” Lampard said in an Instagram chat with Chelsea fan and NHS Doctor Panos Theodoropoulos.

“It was like a ‘Wow, this is a real strong Champions League team here’. I didn’t feel that bad after, disappointed of course, because you go 3-0 and the game is probably gone even with the away leg.

“But you’re like that’s the level for the young boys, and a few of them were playing that night, and us as a team with our level of quality as players, especially in a team that are clinical with [Robert] Lewandowski, then we need to know that.

“I think they played some really good games with Ajax in the rounds before that and going away to Lille where we performed under pressure.

“When you look back at the season, our performances against City, we went there an lost 2-1 and played really well for big parts of the game. Every game we’ve played against Liverpool we’ve competed against them and they are comfortably the best team [in the Premier League].”

Moyes full of praise for ‘talented’ Billy Gilmour, and laughs off Declan Rice links to Chelsea