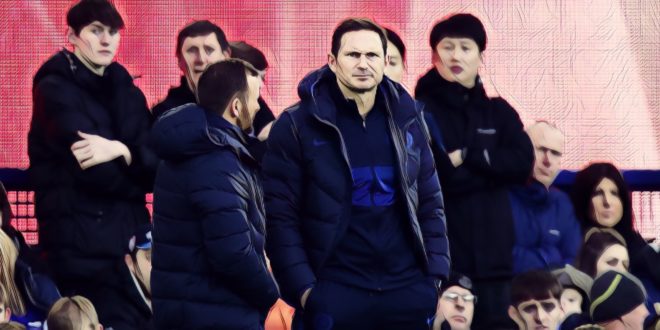 Chelsea fell to their third Premier League defeat out of four in Saturday’s early kick-off, losing 3-1 to a rejuvenated Everton at Goodison Park.

Under the caretaker charge of Toffees cult hero Duncan Ferguson, Everton got off to the perfect start, with Brazilian attacker Richarlison heading home an inch-perfect cross from Djibril Sidibé in the fifth minute.

Chelsea would dominate much of the first period but a combination of determined defending by the hosts and a lack of quality in the final third from the visitors saw Everton go in at the break a goal up.

Everton would start the second-half much like the first, Dominic Calvert-Lewin showing great determination to finish past Blues ‘keeper Kepa.

Chelsea pushed on in search of an equaliser, but Everton would seal their first Premier League since 9 November, when Calvert-Lewin bagged his second after a penalty box melee.

Not for the first time this season Lampard’s side looked fragile defensively and speaking after the game, the Blues boss admitted his side had failed to compete physically with a fired-up Everton team.

“You are playing a team who have got a lot of fighting spirit…and we’ve got to do more than we did,” Lampard told BT Sport.

“I expect us to match everyone in this league on (work-rate), but sometimes physical contact is another thing.

“If you’re not going to win headers, at places like Goodison especially, it’s going to be tough to come here and win like that.”