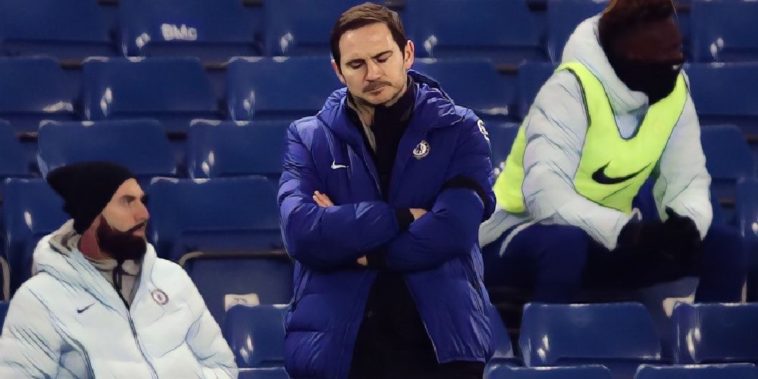 Frank Lampard backed his Chelsea side to have the ‘character’ to bounce back from their poor spell of form following their disappointing 3-1 loss to Man City.

Chelsea started the brightest and enjoyed a dominant opening 15 minutes, however, after Manchester City finally established a foothold in the game, they quickly got themselves ahead – Ilkay Gundogan creating space for himself with a smart swivel on the edge of the box before firing low past Edouard Mendy into the bottom corner.

City swiftly doubled their lead three minutes later, Phil Foden driving at the Chelsea backline and continuing his run in toward the near post after the ball went wide. It was fizzed back into the unmarked England international who swept home left-footed to hit Frank Lampard’s side with both barrels in quick succession.

13 minutes later and it was three, Raheem Sterling scampering away as Chelsea failed to make the most of an attacking free-kick, and just as it looked as though the chance had gone after the England forward was pushed wide, his curling effort came back off the post and into the path of Kevin de Bruyne who despatched the rebound into the back of the net.

The second half stats show that Chelsea dominated possession, though make no mistake, it was City who were firmly in control as they showed a willingness to sit back and wait for what felt like an inevitable mistake before looking to hit on the break.

Chelsea have conceded 3+ goals on 4 different occasions in the Premier League this season.

Chelsea did, however, pull a goal back with virtually the last kick of the game, finally getting in behind City’s defence with Kai Havertz’s low cross being met by Callum Hudson-Odoi at the back post who fired past an otherwise untested ‘keeper Zack Steffen.

Speaking afterwards, Frank Lampard admitted his side were handed ‘serious lessons’ by a City side who looked back to their very best at times.

“For ten minutes we were good, then they started to play and we concede two poor goals back to back in the game,” he told Sky Sports. “It knocked us and we didn’t react well, we allowed the space for Kevin de Bruyne and Ilkay Gundogan for the first goal. Serious lessons in the first half, good character in the second half but then the game was done.

“Everyone a month ago saying we could win the league I was pretty sure in terms of a rebuild, the [transfer] ban and the youth that there were going to be periods of pain we were going to go through. When a team gives you a problem it has to be dealt with but we didn’t.”

Chelsea have picked up just four points from their last six Premier League games, a run which included another dismal performance and a 3-1 loss at the hands of Arsenal on Boxing Day.

However, a somewhat bullish Lampard insisted his side do have ‘character’ to turn around their current run of form, admitting his side are ‘in a little period’.

“It’s not the same emotion, the first half against Arsenal was lethargic but today City were showing real personality and control on the ball. That’s when you get tested and I’m not leaning on the youth because I thought they were good – Billy Gilmour and Callum Hudson-Odoi with his goal was positive. At the minute we’re in a little period, five or six games that we’ve struggled. If you go back to City and Liverpool in their transition periods there were periods of pain and you have to get through that.

“I’ve sat there and had these days and then lifted a trophy at the end of the year. We bounced back then because we had a spirit in the dressing room and any player in football will have periods like that. Some other defeats for other teams have been painful. We have to take it on the chin, this is football.

“We have character – we have 16 games unbeaten. A month ago people are asking where is this going to go, when are you signing a new contract and now they’re saying the opposite. I’ll be the first to look at myself today but I know where we’re at and I know what it takes to churn out the level that City were at today. It’s normal that we take knocks but now is a test.”

Chelsea now have a rare week of preparation before they face Morecambe in the FA Cup third round on January 10th.