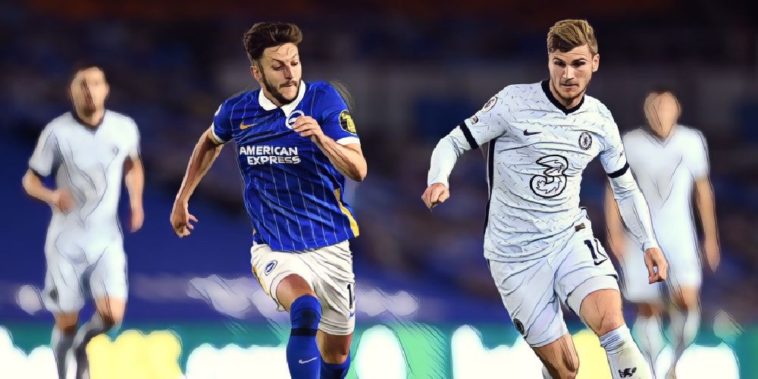 Chelsea got their season off to a winning start, Frank Lampard’s big-spending side running out 3-1 winners on the south coast against a valiant Brighton.

Much has been made of Chelsea’s summer spending spree, though Frank Lampard was only able to name two of his summer signings in the starting XI, with Kai Havertz and Timo Werner making their Premier League debut’s.

After a cautious opening 20 minutes, Chelsea were handed a golden opportunity to take the lead, Steven Alzate’s careless square pass going straight to Blues midfielder Jorginho. The Italian played in lively debutant Werner who was then taken down by the Seagulls keeper, leaving the referee with no option but to award a spot-kick. Jorginho stepped up, and following his trademark skip, sent Mat Ryan the wrong way.

The goal sparked the goalmouth action into life, and almost provoked an immediate response from the hosts, former Chelsea youngster Tariq Lamptey playing a deliciously weighted cross from the right towards Neil Maupay, who should have done better with his header

Having been negatively involved in the conceding of the opener, Alzate looked to make amends for his mistake, the 22-year-old’s effort from the edge of the box stinging the palms of underfire ‘keeper Kepa Arrizabalaga.

Shortly after the interval though and Brighton did pull themselves level, Leandro Trossard cutting onto his left foot to direct his strike goalbound, the Belgian exposing Kepa’s weakness from range as the ball bounced under the Spaniard’s outstretched arm to nestle in the bottom corner.

Brighton looked the better side, but they were only level for a matter of minutes, the visitors smashing themselves back into the lead through an unlikely source. Finding himself centrally positioned, young right-back Reece James unleashed an absolute screamer from 25-yards into the top right corner for the 20-year-old’s first Premier League goal.

Chelsea did secure all three points though as Reece James followed up goal with an assist, the full-back’s corner finding Kurt Zouma, whose tame goalbound effort deflected into the net by Adam Webster’s outstretched right leg.

Speaking after the game, Lampard admitted his side weren’t at their best, and hopes to see more fluidity from his side as his expensively assembled stars get used to each other.

“I thought we were OK,” he told Sky Sports. “I liked the work ethic. If you analyse the fact that we’ve been together as a team for four days, to expect everything to click on day one is difficult. We showed determination and that is a game we might have dropped points in last year.

“I don’t want to pin us down to one system. We have three or four players who want to play as a 10 for us but I want us to be adaptable. We have a lot of attacking players, I want us to be fluid, I want that movement.

“We weren’t as fluid as we can be today but we will work on that.”

Despite club-record signing Havertz struggling at times on his first outing for the Blues, Lampard took time to praise the 21-year-old and his fellow debutant Werner as Chelsea look to close down the gap to the likes of Liverpool and Man City, the Stamford Bridge outfit having finished 33 points adrift of the league winners last season.

“I liked Kai Havertz. It’s not a game where you come away with some vintage moments and there’s a lot on his shoulders but you saw glimpses of what he can do. Everything I have seen from him is spot on and his quality will come through. He’s hugely talented.

“I loved the way that Timo Werner pops up in different areas, he has a hunger to score goals and be ruthless.

“We definitely want to close that gap to Liverpool, we have to have intentions to be up there even though it is a big ask to win it. We are behind, it’s step by step. Hopefully we can make big strides.”

Chelsea are believed to be closing in on the signing of Rennes ‘keeper Edouard Mendy following Kepa Arrizabalaga’s well-documented struggles, and despite what looked like another mistake for Brighton’s goal, Lampard insisted he was happy with the Spaniard’s performance.

Next up for Chelsea is a home tie against reigning champions Liverpool.