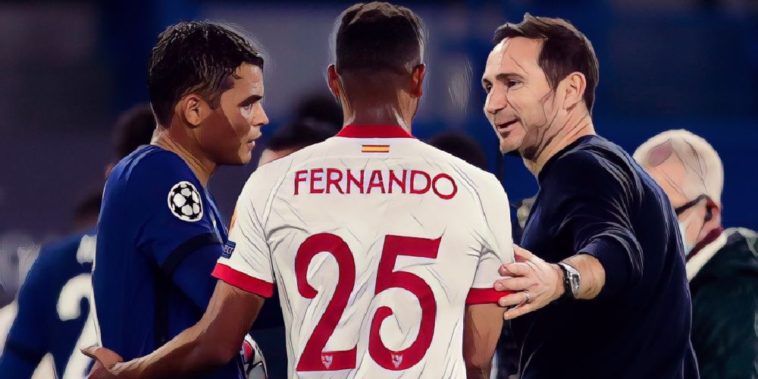 Chelsea got their Champions League campaign underway with an uninspiring goalless draw against Europa League winners Sevilla on Tuesday night.

Much has been made of both Chelsea’s attacking threat and defensive frailties over the last year or so, though their expensively assembled front line struggled to make much of an impact in the first half at Stamford Bridge, mustering just a single shot on target in the first period.

However, they did uncharacteristically manage to keep it relatively tight at the back, with returning goalkeeper Edouard Mendy keeping out Nemanja Gudelj’s deflected header before the break.

The Blues did come out with a bit more threat in the second half, though they were still unable to find a way through Julen Lopetegui’s well-drilled side, with Kurt Zouma, Ben Chilwell and Timo Werner all seeing their efforts saved by Yassine Bounou in the Spanish side’s goal.

Ultimately, it will be a game that won’t live too long in the memory, though Chelsea boss Lampard was delighted to see his side register a clean sheet – in what was the first scoreless draw of his Stamford Bridge reign – the former midfielder admitting that he was ‘happy with a point’ against the highest-seeded side in their group.

“It feels good to get the clean sheet, it’s something you always strive for,” Lampard told BT Sport. “Thiago Silva was excellent, he has experience and quality. Edouard Mendy had one save to make and he made a good save, he was good with his feet. Against a good team, it was a very organised performance from us.

“Sevilla pose a lot of threat – the crosses and balls into the box, they played really well and they’ve got quality. We had a few moments in the game, it was cagey and the two teams seemed to be cancelling each other out in the first half which was understandable. We take the point and move on.

“Both teams seemed happy with the point I think. We conceded a goal in the last minute the other day so when you have that feeling fresh in your mind it’s not nice. So this game will give us confidence but we haven’t’ had the personnel in training regularly and the more we have that the better we will get.

“When you play in the Champions League sometimes you rely on a moment but for us tonight it didn’t quite come. The last bit wasn’t there today, but we can’t complain, we’ve scored a lot of goals in the Premier League so far so we have to be happy with the clean sheet.

“We have to build, its a long season and we’re in the early stage of it – it’s a good start in a difficult group.”

Next up for Chelsea is an away trip to face Manchester United, who defeated PSG in their Champions League opener, before the Blues travel to face Russian side Krasnodar next week.