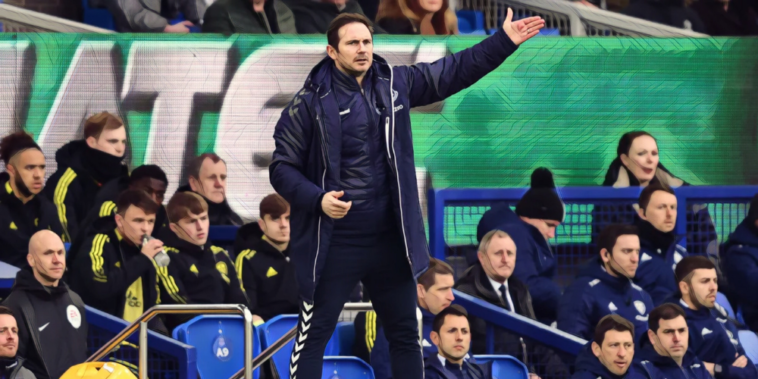 Frank Lampard insists Everton’s clash with Crystal Palace is not an ‘all or nothing’ game’ but says ‘the size of this game can’t be lost on anyone’.

Everton host the Eagles on Thursday evening knowing a win will confirm their Premier League status for another season.

The Toffees have been embroiled in a relegation battle after a difficult season on Merseyside, but seven points from the club’s last four fixtures has lifted Lampard’s side within reach of safety.

Speaking at his pre-match press conference, Lampard said that the Palace game wasn’t an “all-or-nothing” encounter, given that his side could get something at Arsenal on the final day, but admitted: “Historically it could be a big night for us because we know the situation.”

“I’m certainly not overplaying the idea of a relegation battle as if that is something to get excited about,” he added.

“It is just that, with the situation we are in, it is absolutely pivotal to the future of the club in the short term to get the results we need to stay in the league. Also football is about moments and about the opportunity for the players, the staff and the fans to come together and share a moment that means a lot to the club. And we shouldn’t understate that.

“It won’t be cause for huge celebrations if we get the right result but at the same time everyone is fighting in the same direction for something, so we have understand what a big night that could be for the club.”

Lampard discussed how his side will approach the game and admitted there will be an onus on Everton to attack, before calling for his team to show the ‘same attitude’ that secured positive results against the likes of Manchester United and Chelsea.

“You have to approach every game differently in terms of the opponents,” he said. “Against Chelsea there was an expectancy to have only 30% possession and we had to defend very well and accept their passing and style. Man United was different, Palace will be different. We understand their threats.

“There’s probably more onus on us against Palace to show more attacking intent and probably have a bit more possession and be higher up the pitch. So it is different in that sense but in terms of the attitude, yes, we want the same attitude as we approached Man United, Chelsea, Leicester, even Liverpool and Man City because we approached them with absolutely the right attitude.

“It is really obvious what is at stake in this game, and the last two games, and the size of this game can’t be lost on anyone.”