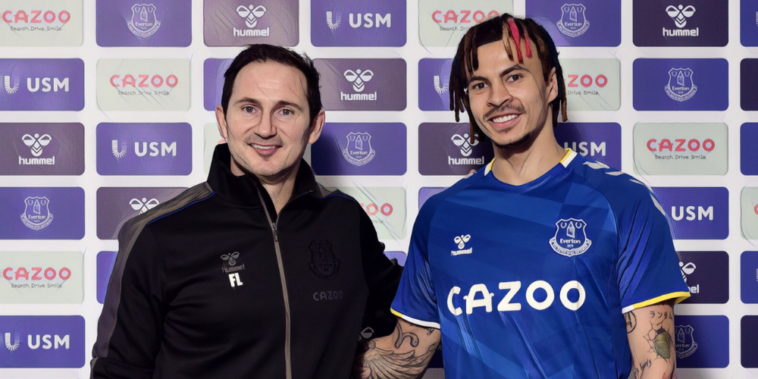 Frank Lampard is keen to give Dele Alli a ‘clean slate’ at Everton after securing the signing of the midfielder from Tottenham on deadline day.

Alli signed for Everton in the closing stages of the transfer window a deal that could rise as high as £40m, following a frustrating period at Spurs in which the 25-year-old struggled for form.

Having won back-to-back PFA Young Player of the Year awards during his time in North London, he has not featured for England since 2019 and has failed to score a goal from open play in the Premier League across the past two seasons.

Lampard discussed the signing of the midfielder ahead of Everton’s FA Cup fourth round clash with Brentford this week and says the move to Merseyside represents a fresh start for Alli.

“I don’t want to give too many major headlines over this because it’s easy to be over the top about that side of it,” he said.

“I watched Dele come through, he’s a fantastic player. Maybe he’s had difficult times. I will make no bones about that and nor would he, but there can be so many reasons for that.

“My job is to start with a fresh slate with him, to have him in an environment that suits him and supports him, but also to push him and to extract that player that we know is there. I’m very excited to have him and Donny.

“All the attributes, the talent and the technique is still there. We’re much more aware in the modern day of how there are many factors that can affect you in life and sport, how happy you are at doing your job or why it might not be working in the right way, so I just have to find the right environment for Dele.

“Our job is to get to work and then we can let Dele express his talent.”

There have been comparisons to Alli’s position to the one that Lampard used to operate during his playing days, and the new Everton boss offered his thoughts on the role that Alli can operate in for his side, whilst he also speaking about Donny van de Beek following his arrival on loan from Manchester United.

“We are different,” said Lampard. “It’s an easy comparison. I think in terms of position, I started deeper and I think Dele starting higher can be more effective.

“He is versatile, he can link up play, and I’m very interested in working with him. It’s nice to work with players who occupy similar areas of the field.

“A player like Donny is someone who can link play. Slightly different to what we have. Dele also has his own versatile nature.”