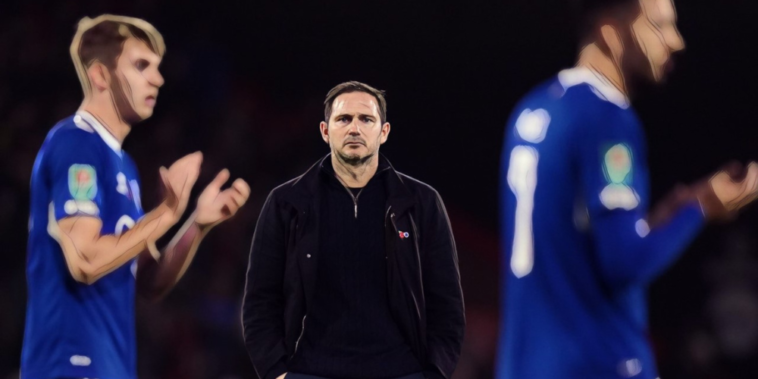 Frank Lampard has called on individuals to ‘hold their hands up’ after Everton crashed out of the Carabao Cup with a 4-1 defeat at Bournemouth.

Lampard suffered his worst defeat as Everton manager after the Toffees were thrashed at the Vitality Stadium, with a rotated side – that included 11 changes – well-beaten on the South Coast to crash out of cup competition.

Bournemouth had made nine changes of their own, but the Cherries were dominant as Everton struggled to live with the hosts in a humbling performance. Everton lacked leadership and quality in the absence of Jordan Pickford, James Tarkowski and Conor Coady and Lampard was critical of his side’s inability to compete.

“In terms of the set-up of the game, I made changes because I’ve got to protect players who have got niggles or are playing again with the [short] turnaround for a really important league game on Saturday,” he told the media at his post-match press conference.

“But I also made changes because some players have been knocking on my door wanting to play and some players have trained well and made a case for playing. You put them in because they play for Everton and they should be able to come to Bournemouth and compete.

“Without even going into the nitty gritty details, they should be able to because there’s a lot of experience in that team. They didn’t do that – it’s clear as day. I think the fans saw that.”

Lampard insists the team he chose was strong enough to progress despite mass changes, though said individual errors – which included a calamitous slip from Mason Holgate in the build-up to Bournemouth’s second – contributed to his side’s exit.

“Absolutely – there’s no doubt about that,” Lampard said on whether his line-up had been good enough to win the game. “We can go into detail of the game… We should have been winning at half-time. They had one deflected shot, we had two golden chances. That changes the feeling of the game. The second goal is just an incredible goal from our point of view – it can’t happen at this level of football, that type of goal, there’s no doubt about that. That makes the game difficult.

“You chase the game and what happened can happen. There’s another mistake on the fourth goal.

“There are individuals that need to look at themselves and say ‘I was absolutely culpable there’ and hold their hands up. Generally, this season, one thing I can say about us is that we’ve been defensively sound, defensively resolute when balls go into the box, and you don’t get the feeling that teams are going to score. We’ve been very good at that and tonight it looked different.”

Lampard spoke further on his challenge to improve Everton and believes the manner of their loss at Bournemouth has told him more about his fringe players than any training session.

“I wanted to get through to the next round of the Carabao Cup, but when I look at the squad now, I learn more from them tonight than I do from watching training every day. That’s really interesting to me and we have to understand this season there may be difficult patches as we go forward to get to where we want to be.

“It’s not just going to go from where we were at the end of last season – just staying in the league, losing the main source of goals in the team – then trying to build around that with some signings and younger players, loans and free transfers. That road is not a simple one. Tonight was a big example of that.”

Everton face an immediate reunion with Bournemouth in the Premier League this weekend and Lampard insists his team will be much improved as the two teams renew rivalries once again.

“That’s the good news. We’ll look different and we’ll play different. I’m not talking about things like the system or shape – I’m just talking about a level of individual performance.

“If we get the three points, then I’d be relatively happy with the first part of the season and where we are in the league – you always want more, but it’s a competitive league and we’ve had a lot of challenges. That’s all my focus is on and this game only hones that focus more.”