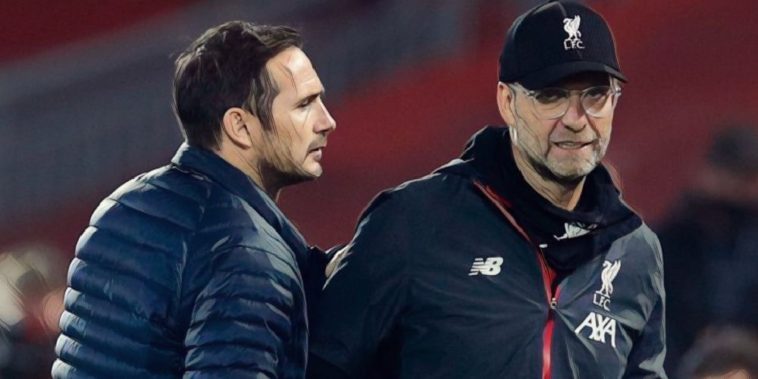 Frank Lampard says he was amused by Jurgen Klopp’s comments of Chelsea’s summer spending spree and insists investment is a necessity when challenging for the Premier League title.

Chelsea have taken headlines this summer following a lavish summer spend on a host of exciting additions, the arrivals of Timo Werner, Hakim Ziyech, Ben Chilwell and club-record signing Kai Havertz raising optimism that Lampard’s side can challenge this season.

The west London side’s ability to spend in the current climate has not gone unnoticed by their Premier League rivals with Liverpool boss Jurgen Klopp commenting on the club’s recruitment this week, the German insisting his side can not compete in the transfer market with clubs who are owned by countries or oligarchs.

Klopp also warned that it could take time for Chelsea’s new-look side to gel ahead of the club’s season opener at Brighton this evening and whilst Lampard agrees with that sentiment, he admits he was amused by the Reds’ manager’s comments given Liverpool’s spending in recent years.

“I was less annoyed with it,” Lampard said at his pre-match press conference. “I found it slightly amusing because I think when you talk about the owners of clubs, I don’t think it matters what line of business they come from.

“We are talking about some very wealthy owners of clubs in the Premier League. With Liverpool’s story, I referenced it a lot last year. It’s a fantastic story of a club over the four and a half or five years that Jurgen Klopp’s been there where they’ve managed to get recruitment right to a really high level.

🗣️ Lampard on signing Werner: "You understand that when there is competition from the likes of Liverpool and Manchester City that you need to state your best case to the player.

"With a player like Timo, we were very keen to bring him in. He needs to feel that from us." 🥰 pic.twitter.com/bPhPFHrCCw

“The reality is – other than maybe Leicester, which was an incredible story – most clubs that win the league in the modern day have recruited well and have recruited at quite a high-level money wise. You can go through the Liverpool players – Van Dijk, Alisson, Fabinho, Keita, Mane, Salah.

“Incredible players that came at a very high price. Liverpool have done it over some time. What we have done is come off the back of a ban and probably try to address the situation ourselves to help improve us. It’s par for the course. We all know that.

“When you carry on and what I read from Jurgen Klopp was that he said about the idea of bringing in a group of players is not going to be easy for us no matter what the level is and as I mentioned there we are talking about some younger players from different leagues.

“I think he was talking with fair context when he said it like that but in terms of the money spent, of course, Liverpool have spent huge amounts in a very good way as well.

“In terms of where we’re at, we have to not focus too much on what other teams, managers, supporters, radio, media say, we have to worry about what we can do on the training pitch as that’s the only thing that will define us so I’m not too concerned.

“I’m pleased with the business we’ve done, really pleased. Now I want us to be excited as a team to work hard to get results.”