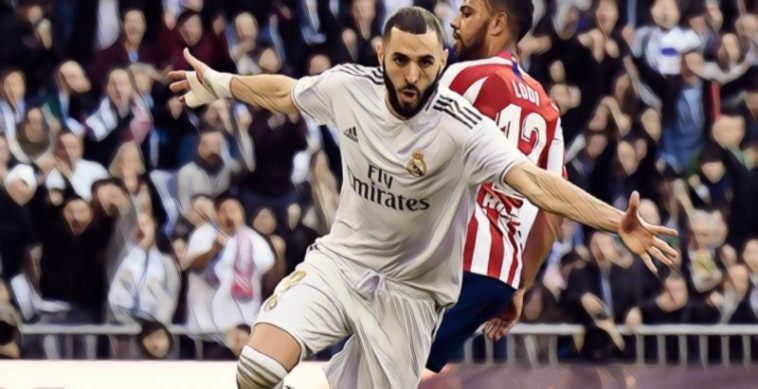 In a busy weekend of action in La Liga, the pace setters Real Madrid and Barcelona managed to pick up three points each, Zinedine Zidane’s men three points clear at the top on 49 points.

There were also interesting results and talking points as we moved further down the division, let’s have a look at those in more detail now.

Real Madrid finally get the better of Atleti

Karim Benzema’s second-half strike was enough to give Los Merengues a 1-0 win at home to Atletico Madrid, their first league win at home against Atleti since the 2012-13 season.

In the context of the title race this was a big win for Real Madrid, moving them six points clear of Barcelona, for 24 hours at least, as Quique Setien’s side played late on Sunday.

While admittedly not scoring freely, Zidane’s side are doing enough in games and are on a four game winning run, leaving them top of the table on their own, heading into February.

From an Atletico perspective, things seem to be going from bad to worse. They performed well on Saturday, particularly in the first-half, yet were hit with more bad news when Alvaro Morata picked up an injury which could keep him out of action for a number of weeks.

With Diego Costa, Joao Felix and now Morata sidelined through injury, it’s hard to see where the goals are going to come from in order to keep Diego Simeone’s side competitive in La Liga.

Leganes snatch it at the death

A wonderfully taken free-kick from Oscar Rodriguez with the final kick of the game, proved to be the winner in a well-deserved home win for Leganes over Real Sociedad on Sunday.

Lega, who were heavily beaten by Barcelona in the Copa del Rey on Thursday, were full value for the victory and were by far the better side after falling behind to an early Alexander Isak goal for La Real.

Javier Aguirre’s side lost their most prolific forward Youssef En-Nesyri to Sevilla in the transfer window and that blow was evident in a 3-0 home defeat to neighbours Getafe, a couple of weeks ago.

However, the South Madrid-based side have only been beaten once in the last seven games and are level on 18 points with Mallorca who are above them on goal difference.

The timing and enormity of Rodriguez’s goal on Sunday could be significant for Lega as they battle to stay in the division, a distinct possibility if they can maintain their current form.

Getafe no flash in the pan

Neighbours to Leganes in the south of Madrid, Getafe, left San Mames on Sunday afternoon with three points after a 2-0 victory away at Athletic Bilbao.

The win, their third league victory in a row, has José Bordalas’ side in third place in the table on 39 points, seven adrift of Barcelona in second.

What Getafe are achieving on such a limited budget is an example to all small clubs of what is possible, with good planning and above all good coaching.

In José Bordalas, Los Azulones have one of the most talented young coaches in the league and it’s not impossible to imagine them bringing Champions League football to the Coliseum Alfonso Perez next season.

Proof of the fact that Getafe has to balance the books, was the selling of Uruguayan defender Leandro Cabrera to Espanyol for €9 million in the winter transfer window.

For them to be where they are factoring in the financial constraints that are their reality, is testament to Bordalas and his squad of players.

Celta Vigo and Espanyol currently reside in positions 19 and 20 in the La Liga table. Both, however, had been undefeated in their previous four outings before losing out this weekend, the Galicia-based side away at Valencia and the Barcelona-based outfit at Granada.

Usually, in a season there is a side who is struggling badly in the league and deserves their place in relegation trouble. However, the three sides occupying the relegation places are actually playing quite well since Christmas.

As already mentioned, Leganes in 18th position have been on a good run of form, as have both Celta Vigo and Espanyol.

Celta, who had drawn their previous three games, have been every bit as good as their opponents of late but cannot finish off their chances.

Iago Aspas and Rafinha have been performing well for Oscar’s side and will hope to start converting some of the chances created, to give them a chance of survival.

Abelardo Fernandez has been given the financial backing from the Espanyol board over the winter transfer window and has brought in Raul de Tomás from Benfica and Leandro Cabrera from Getafe, to try and maintain their survival in the top flight.

Tomas has three goals in three starts since his arrival and if he can keep up this good form, Espanyol may have a chance of staying up.

Just 28 league goals scored for Julien Lopetegui’s side so far this season, who still find themselves in fourth place, two points clear of Valencia.

Lucas Ocampos scored from the penalty spot in Sunday evenings 1-1 draw with Alaves at the Ramon Sanchez-Pizjuan, this was the Argentinian’s sixth goal of the campaign.

Luuk de Jong has accounted for four of his sides goals, Nolito and Franco Vazquez on three.

Lopetegui has brought in Youssef En-Nesyri from Leganes to bolster the attack, in the hope that his side can start converting possession into goals.

Sevilla have also got Ever Banega and Suso creating chances from midfield, so will hope they can start to find the net on a more regular basis and become more consistent collectively if they are to remain in the Champions League places.