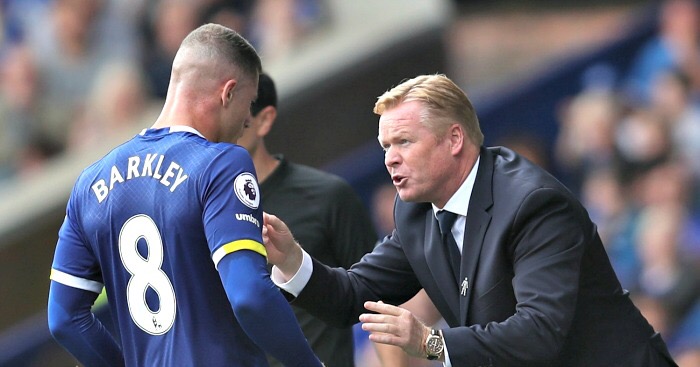 Ronald Koeman has confirmed that Ross Barkley has decided to leave the club.

The England international has been heavily linked with a move to Tottenham Hotspur, while Manchester United, Chelsea and Arsenal are also credited with having an interest.

Everton made a new contract offer to Barkley towards the end of last season, an offer that was declined by the player, and now Koeman has confirmed that the player has asked to leave, but insisted that no club had yet made a move:

“His situation is not too difficult, we made a good offer of a contract, he declined and told me that he is looking for a new challenge.

“It is not Everton future any more, it is his decision but the board say there is no offer on the table for Ross.

“My priority is not Ross, with respect, it is his decision.

“I look more to other players.

“He has one more year of contract, we work with respect. If he is back for training he will be part of first team training.”

Everton are believed to have slapped a £50m price tag on Barkley, despite him having just one year remaining on his current deal at Goodison Park.

Tottenham are known to not be willing to pay such a fee, with them valuing him at just £15m.

Everton’s competitive season gets under way this week as they face Rozomberok at Goodison Park in a qualifier for the UEFA Europa League.