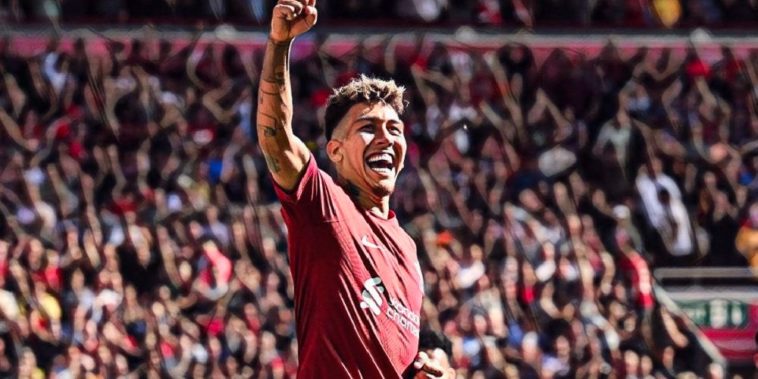 Liverpool finally registered their first victory of the season, and did so in emphatic style, sticking nine goals past a sorry Bournemouth to equal the Premier League record.

Liverpool had faced questions after they came into the game on the back of two draws and a defeat from their opening three games, but came out of the traps absolutely flying against Bournemouth to take the lead after just three minutes. Roberto Firmino picked up the ball on the right of the box before picking out Luis Diaz who headed into the top corner from just six yards.

Three minutes later and the Reds doubled their advantage as they again attacked down the right, with Trent Alexander-Arnold picking out Firmino on the edge of the box. The Brazilian’s touch rolled into the path of youngster Harvey Elliott, who stroked home with a delightful first-time finish for his first Premier League goal.

Firmino registered his third assist of the afternoon just before the half-hour mark, playing a one-two with Trent Alexander-Arnold in midfield before the Liverpool full-back unleashed an absolute rocket of a strike past Mark Travers.

Having been integral to the creation of Reds’ first three goals, Firmino then bagged a goal of his own, the Brazilian throwing himself at a deflected Mohamed Salah cross to volley home from close range.

On the stroke of half-time, Liverpool added a fifth, with Virgil van Dijk becoming his side’s fifth goalscorer of the afternoon, the Dutchman rising highest in the middle of the box to head home an Andrew Robertson corner – the first time the Merseyside club have netted five in the first half of a Premier League game.

The goalscoring didn’t end there though, with the Anfield crowd treated to a sixth just minutes into the second half as Wales international Chris Mepham turned into his own net following an Alexander-Arnold cross.

Roberto Firmino had himself an afternoon 🤩 pic.twitter.com/x18qHUf0Kh

Firmino registered his fifth goal involvement of the game with 28 minutes still to play as he poked home from close range after Travers had saved his initial effort following an inswinging cross from Robertson.

The Reds weren’t finished there though, summer signing Fabio Carvalho netting his first goal for the club to make it 8-0, before Luis Diaz – scorer of the first – nodded home an inswinging corner from the right to equal the Premier League record victory of 9-0.

The victory moves Liverpool back into the top half of the table following their disappointing start, and Jurgen Klopp said he sent his side out with the aim of getting a ‘reaction’ to their poor start to the season.

“Very good. We wanted to show a reaction. Be ourselves. Getting to be the best version of ourselves. We play a specific way,” he told Sky Sports.

“We scored wonderful goals. The game settled and we kept scoring. It was about keeping going. Not to humiliate Bournemouth, we couldn’t respect them more. It’s about putting the opponent under pressure. I could bring on the kids, they deserve it so much. Harvey is a special player, wonderful goal. Everything was perfect pretty much.”

Asked about Trent Alexander-Arnold’s fantastic strike, Klopp admitted he doesn’t like his players to be encouraged to have a go from distance.

“I don’t like it too much when a player is 35 yards away and the whole crowd shout ‘shoooooot’ but in this case it worked out well.”

The German said that it was good to finally get back to winning ways, though said his attentions are already turning to facing Newcastle on Wednesday.

“It’s important to get it off the chest and play football. Wednesday will be different. Today the mix of great weather and fantastic football, we don’t have that often at Liverpool so we should cherish it.

“At least we don’t have to answer the question anymore [about not winning]. A really good day for us. We won’t get carried away.

“If we want to be successful in this league we have to show consistency. That’s what we have to do now. That used to be our strength. We’ll watch Newcastle tomorrow and see what we can do against them.”