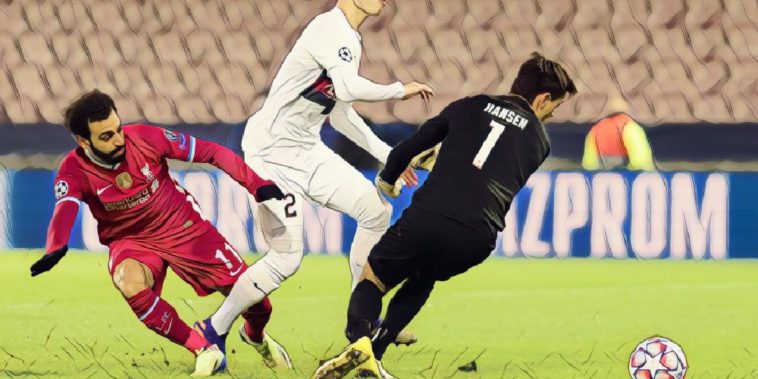 Liverpool ended their Champions League group campaign with a 1-1 draw against Danish side FC Midtjylland.

With Liverpool‘s place in the knockout stages already secure, Jurgen Klopp made a number of changes to his starting lineup, though his side was still littered with familiar names, with the likes of Mohamed Salah, Diogo Jota, Fabinho and Trent Alexander-Arnold lining up in Denmark.

The Merseyside outfit got off to a rapid start, with Salah taking advantage of a sloppy pass, the Egyptian driving towards the Midtjylland goal before slotting through the legs of goalkeeper Jesper Hansen after just 55 seconds.

Despite trailing, the Danes remained in the game and had an effort cleared off the line, as both sides created a number of presentable chances throughout the first half, while the hosts hit the bar early in the second.

With an hour played though, Midtjylland were eventually awarded a penalty after Reds ‘keeper Caoimhin Kelleher brought down Anders Dreyer, and while he was initially flagged offside, VAR overturned the ruling with Alexander Scholz stepping up and firing past the young Irishman from the spot.

While VAR went for them in the awarding of the penalty, it did, however, rule out Scholz’s 77th minute strike for an offside, while a last-ditch block by Jordan Henderson in the 89th minute prevented his side from slipping to defeat.

Speaking afterwards, Klopp discussed his side’s deficiencies after the break against Group D’s bottom side.

“I really like the football we played first half, we had really big… if it’s not a chance then nearly a chance, but we had a lot of these moments which we could have used in a better way and that was good.

“We wanted to build on that in the second half and that didn’t work out. We didn’t play football anymore and Midtjylland became even more physical, pretty direct. We didn’t defend their throw-ins that good anymore, it’s not rocket science that they always try to switch the sides with these balls, it’s just that if you don’t defend on the one side then you have to run to the other side and defend it there and that’s much more intense.

“First half we did that much better than second half, so all these different things. But the main part was that we didn’t play good enough football in the second half and that’s the reason why the game was much more open in the second half.

“The penalty, 1-1 and then the momentum really swapped to Midtjylland. They were really believing and we were only hard-working. In the moments where we played football we were immediately in and around their box with really a lot of space because of the man-marking of Midtjylland – and when you move in the right moment you can really use that. We did that in some moments really well but in the end, they scored their goal and another one which was slightly offside. We scored a goal which I’ve heard meanwhile was handball. Yeah, 1-1. That’s it.”

Asked about his side’s start to the season amidst a raft of injuries, the German said: “Honestly it’s absolutely not the moment to think about this kind of thing.

13 – Liverpool have earned 13 points from their six UEFA Champions League games this season (W4 D1 L1); only in 2008-09 (14) have they earned more in a single group stage in the competition. Accomplished. pic.twitter.com/L78HDptPFN

“We played a game with a good first half and a not-so-good second half. We got a point for it… but now Fulham is already in my mind so I cannot really think about what happened so far. To be with whoever at the top of the table is always good in each part of the season, so that’s OK.

“We feel we could have had even more points: we lost completely deserved at Villa, a point at [Manchester] City was OK – but Brighton and Everton, performance-wise and situation-wise we could have or should have, I’m not sure, won.

“So we could have more but that’s the past and now it’s Fulham, and they expect our full focus and they will get it. From now on, that’s it.”

Next up for the Anfield outfit is a trip to face Fulham in the Premier League at the weekend before hosting league leaders Spurs next Wednesday night.

The Fantasy Faithful podcast: Why Mo Salah is essential for FPL Gameweek 12

See also – MVPs: The player each ‘top six’ side just can’t do without