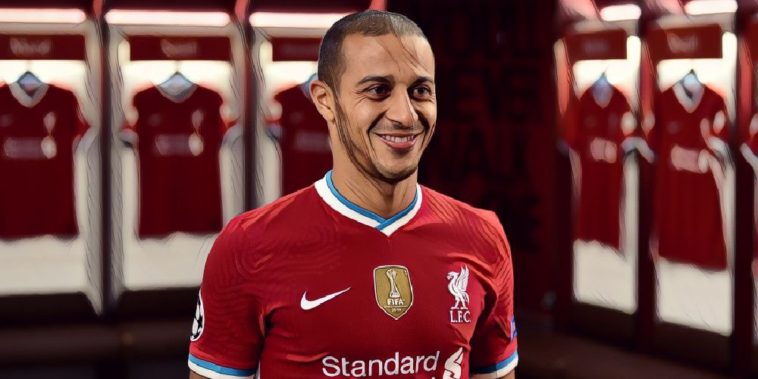 After weeks of speculation, Liverpool finally completed the transfer of Thiago Alcantara on Friday, the midfielder completing a £20 million move from European champions, Bayern Munich.

The Merseyside outfit had long been linked with a move for the Spain international midfielder, though had been reluctant to meet Bayern’s demands of €30 million for the 29-year-old.

The Reds finally came to an agreement with the German champions on Thursday – Sky Sports having reported they will pay £20m upfront and a further £5m in add-ons – before swiftly wrapping up a deal, Thiago jetting to Liverpool and completing a medical before putting pen to paper on what has been described as ‘a long-term contract’.

Liverpool’s midfield of Jordan Henderson, Gini Wijnaldum and Fabinho has often been described as ‘workmanlike’, though the arrival of Thiago will undoubtedly add much more creativity to Jurgen Klopp’s title winners, and the German has outlined some of the qualities that his new number six will bring to the club.

“He can demand rhythm, that’s how it is,” Klopp told LFCTV. “He can obviously create and use space for other players, all these kinds of things.

“His numbers were absolutely special last year in Germany as well, most steals, ball recoveries and all these kinds of things; most passes. But we don’t play like Bayern, so that still will need some time to get settled and nobody should expect – and I don’t expect – the special things immediately, first game, let’s see.

“It’s a long-term project and we have a good team, so we can give time. But, of course, we want to use him on the pitch, that’s clear. So the work can start now.”

Liverpool fans will no doubt be excited to see their new signing in action, and Klopp suggested that he could be in contention to feature during Sunday’s high profile clash against big-spending Chelsea.

“I didn’t make the squad now for Sunday,” Klopp added. “We will see what we can do. I didn’t meet him now, we had only phone calls and exchanged messages. So, let’s have a look how he feels.

“Around a transfer like this the days are pretty busy with things you usually don’t do. If he looks alright, we will find the right place for him.”