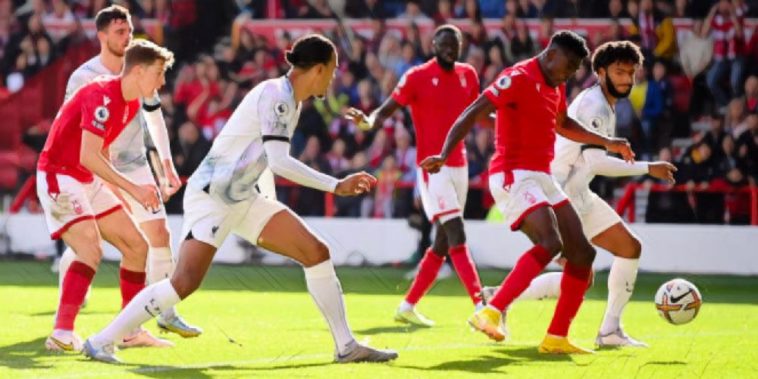 Nottingham Forest produced one of the shock results of the season so far after beating Liverpool 1-0 in the lunchtime kick off.

Liverpool have had a topsy-turvy start to the season, but came into the game on the back of a mini resurgence, winning their last three games in all competitions including becoming the first to beat Manchester City in last weekend’s high-profile encounter.

In what was a renewal of rivalries of old, Jurgen Klopp’s side dominated proceedings at the City Ground, but struggled to really trouble the Premier League’s bottom club in the first 45 minutes.

Having kept the Merseysiders at bay, Nottingham Forest would take a shock lead 10 minutes into the second half. A free-kick just inside the Liverpool half was pumped over to Steve Cook on the right, with the veteran defender firing the ball low into the penalty area. Taiwo Awoniyi got to it first and while his first effort came back off the post, the ball dropped back to the Forest number nine who made no mistake with his second attempt.

The goal seemed to give Forest a shot of confidence, and they had a good chance to score a second as Morgan Gibbs-White released Cheikhou Kouyate down the left, only for Brennan Johnson’s tame effort to be saved by Alisson.

Liverpool did create a number of chances to level the scores, particularly from set pieces, with Virgil van Dijk’s 90th minute effort flashing across the face of goal, before the centre-back was denied by Dean Henderson after the Reds defender had the freedom of Nottingham at a 92nd minute corner.

Speaking after the game, Jurgen Klopp said his side should have won the game and lamented their wastefulness from set-pieces.

“The performance I can kind of explain, the result not to be honest,” he told BT Sport. “I never saw a game where one team has four or five no-brainers from a set piece where we have to finish it off. The way they defend we were perfectly prepared for that. We had to put the game to bed to be perfectly honest.

“The goal we conceded was a big mistake from us. We lose the ball and give them the free-kick and this can happen around set pieces. Apart from that, all the chances they had we gave them. We had to make really late changes and in general a lot of changes and it’s a game you have to win doing the right stuff again and again and again and we didn’t. That’s why we stand here and have lost the game.

“We arrived with consistency but we had six games with a limited squad playing three high intense games. That’s how it is, we cannot change that and we have to fight through. Result-wise we should have showed consistency today. We could have had it by finishing situations off.

“Giving a team six clear chances after a set piece I’m not sure where I should put the praise to be honest. They are a great team and Steve is a great manager but for us today we have to win here and we didn’t, so credit to Nottingham.”