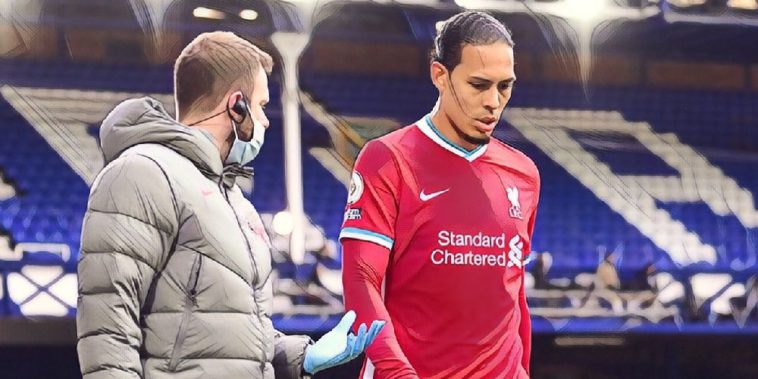 Jurgen Klopp has dismissed the chances of Virgil van Dijk returning this season and has discussed the ‘big blow’ of losing Joel Matip for the remainder of the campaign.

Liverpool’s crisis at centre-back worsened last week after Matip was substituted during the 3-1 win at Tottenham, with scans having since revealed that the Cameroonian will miss the remainder of the season with ankle ligament damage.

Matip joins both Joe Gomez and Van Dijk as long-term absentees and Klopp has provided an update on the latter as he continues his recovery from an anterior cruciate knee ligament injury sustained in October’s Merseyside Derby at Everton.

Klopp has ruled out the possibility of the Netherlands international returning to action during the current campaign, admitting there have been no suggestions that Van Dijk will play again this season.

“No doctor told me there’s a chance for Virgil to play again this season,” said Klopp at his pre-match press conference ahead of tomorrow’s clash with Brighton at Anfield.

“I don’t want to say it’s impossible but it’s not likely. If there is no space we have to make a decision. If he is on the list it is only because we hope for a miracle, that is it.”

Klopp also opened up on the ‘big blow’ of losing Matip, with each of the three senior centre-backs that started the season for Liverpool having now suffered serious injury this season.

The German bolstered his squad with deadline day signings in Ben Davies and Ozan Kabak from Preston and Schalke respectively, but admits the loss of Matip is another blow to the Reds’ hopes of defending the title.

“You lose the player on the pitch and also the person in the dressing room. It looks like he will need surgery so he will be away and you won’t have that personal contact. It’s really harsh.”