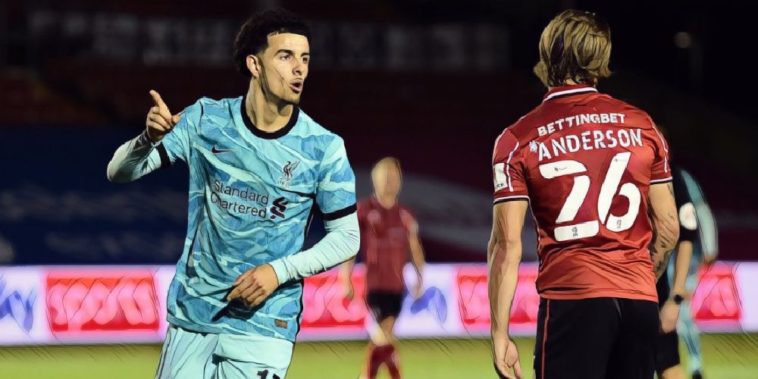 Jurgen Klopp has said that ‘the door is open’ for Curtis Jones to break into the Liverpool side after he put in an ‘absolutely exceptional’ performance against Lincoln in midweek.

Jones netted twice in the 7-2 win over the League One side, taking his tally to five goals in his 16 appearances for the club, his brace against the Imps coming as part of an overall impressive display.

The 19-year-old’s performance has seen some Liverpool fans draw comparisons to former Reds star, Philippe Coutinho, the youngster possessing fine technical ability, an eye for goal, as well as a self-confidence in his abilities.

Speaking ahead of Monday’s clash with Arsenal, Jurgen Klopp has insisted there is plenty of ‘space for improvement’, but said the ‘door is open’ for him to stake a more regular place in the champions’ midfield.

“Self-confidence for a football player is really important because usually you play in front of 30, 40, 50, 60, 70 thousand people and without confidence that’s not possible, I can tell you. Yes, it helps,” Klopp said at his pre-match press conference.

“Doing the right thing in the right moments helps as well. That’s what he had to learn in the last few years because he was absolutely exceptional and maybe the top player of each age group he was in.

“[That] means he had to learn to play together with other players – he made massive steps in that department. He had brilliant role models in this squad.

“And now, the door is open. I don’t want to make the performance smaller than it was because it’s absolutely exceptional. The way he scores, the way he contributes to the game, that’s all really exceptional.

“But Curtis knows himself there’s a lot of space for improvement, like being in a game really over 90 minutes, really being involved – not only on the pitch and these kind of things.

Read – Tweets of the Week: Hollywood comes to Wrexham, deep house Mick McCarthy and… The Undertaker?