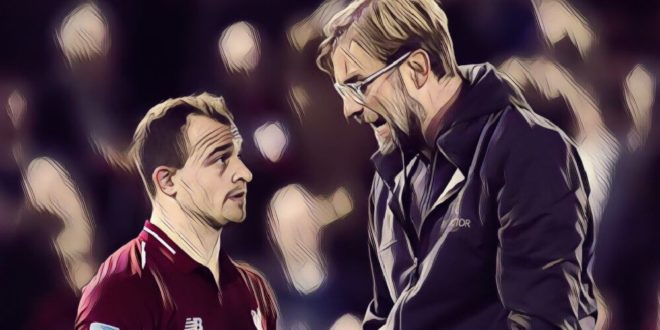 Klopp confirms Shaqiri to be out ‘for a while’

Jurgen Klopp has confirmed that Xherdan Shaqiri will be out of action ‘for a while’ thanks to a torn calf.

The midfielder, a £13.5m arrival from Stoke City last summer, picked up the injury in Switzerland’s 0-0 draw with England in the UEFA Nations League third-place playoff game last month.

Liverpool returned to pre-season training last week, but Shaqiri was among the absentee’s and today, Jurgen Klopp confirmed that he isn’t expecting the Swiss international back any time soon.

“Shaq is still injured from the national team and it will take a while until he is in again,” Klopp told Liverpoolfc.com.

“He has a tear in his calf, so he will not be involved for a while.”

The European champions get their pre-season fixtures underway this Thursday, making the short trip across the Mersey to take on newly-promoted League 1 side Tranmere Rovers, before facing Bradford City on Sunday before jetting to the USA for friendlies against Borussia Dortmund, Sevilla, and Sporting Lisbon.