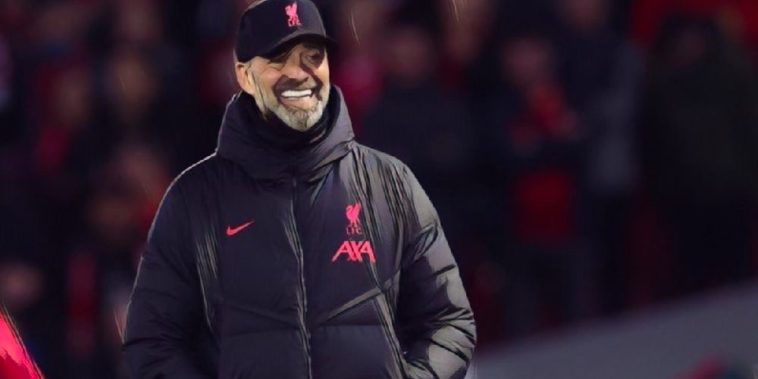 Jurgen Klopp said he was pleased with Liverpool’s reaction as Mohamed Salah and Darwin Nunez secured a 2-0 win over Napoli in their final Champions League group game.

Both sides came into the clash having already secured their passage to the knockout stages, though Liverpool’s chances of topping Group A always looked slender, with the Premier League side needing to beat their Italian counterparts by four goals.

Despite that, though, both sides sent out strong lineups, and it was a lively opening to proceedings at Anfield, with both having chances to open the scoring at each end.

It was Napoli who thought they had taken the lead early in the second half, defender Leo Ostigard diving to head home a free-kick, only for VAR to finally rule it out for a marginal offside after an absolute eternity.

It looked as though the game was drifting towards being a 0-0 draw, but with five minutes remaining, Liverpool would finally bag a goal. Darwin Nunez’s header from a corner was saved on the line by Alex Meret, though the Italian’s save dropped kindly to Mohamed Salah who prodded over the line.

Liverpool did net another in the eighth minute of added time to confirm Napoli’s first defeat of the season, Darwin Nunez poking home from off the line after Virgil van Dijk’s effort had been saved.

Napoli have lost for the first time in all competitions this season. 😲

Speaking after the game, Jurgen Klopp said it was an enjoyable game to watch, while praising his side’s reaction to their 2-1 loss against Leeds at the weekend.

“I did [enjoy that]. I would have enjoyed the game even without the goals,” he told BT Sport. “Tonight, we showed a really good reaction.

“The boys played a good game. A lot of courage, and bravery. Go into challenges, make a proper fight of it, and then, two set pieces bring us the three points.

“15 points in the Champions League group is insane.”

“It’s fine [to say we went back to basics],” he added. “I would consider it a compliment if that is what you saw. We have to start from everything so from that point of view, I was really happy with the performance.

“You have to be compact. In the first game against Napoli, we were much too wide. We had no patience, tried to push through what we wanted and didn’t react to what they did, and obviously, that was much better tonight. I’m really happy.”