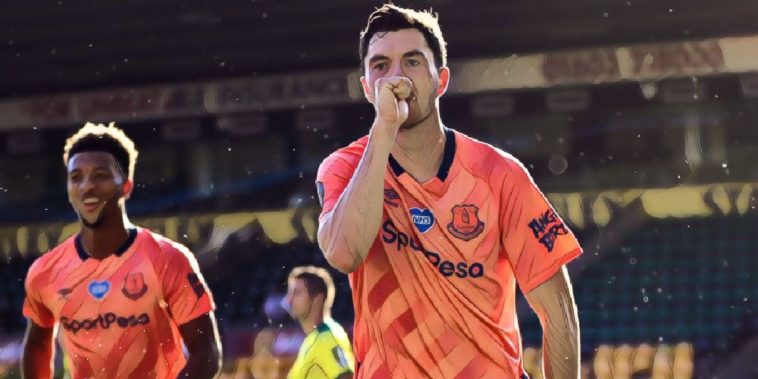 Michael Keane says Everton are eyeing the European places after securing their first victory of the Premier League’s restart with a 1-0 win at Norwich.

Keane scored the only goal of the game to seal three points for Carlo Ancelotti’s side at Carrow Road, with Everton moving into the top half and now just four points adrift of the seventh-placed Tottenham in the race to secure continental qualification.

The England international says his side have been delighted with their restart to the campaign after following Sunday’s Merseyside derby draw, and says the Toffees are keen to keep winning as they bid to finish the season strongly following their victory at a struggling Norwich side.

“Delighted, the lads have worked hard since we got back and put in a great shift against Liverpool,” Keane told BBC Sport. “It is a tough ask on the legs to come a long way three days later and we got what we deserved.

“We changed formation at half-time and it enabled a midfielder to get more on the ball. We are attacking constantly at the start of the second half.

“We are four points off seventh and it is definitely in our grasp and we have seven games remaining. We need to keep getting wins and see where it takes us.”

Ancelotti says his side had opportunities to make the result comfortable but admits he has been pleased with the club’s defensive solidity after securing consecutive clean sheets, with the Italian reiterating Keane’s stance that European football is within their grasp.

“We had good opportunities to close the game out on the counter but we were in good shape,” Ancelotti said.

“What we needed from this game was three points, the three points arrived and now we can dream to climb up the table. The players satisfied me a lot.”

Next up for Everton is a home game against third-placed Leicester City on July 1st, the Foxes having registered two draws since football’s restart.