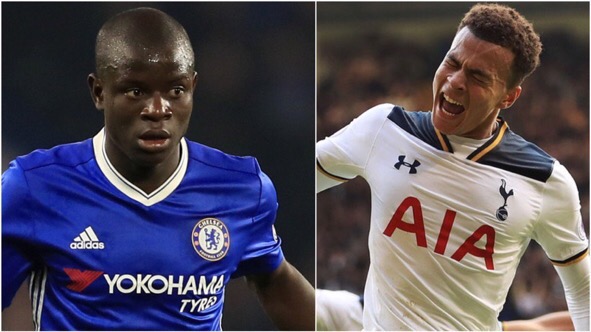 French midfielder N’Golo Kante was announced as the PFA Player of the Year at an awards ceremony in central London last night.

Kante moved to the Premier League in the summer of 2015, joining Leicester City in a £5.6million deal from Caen. That deal ended up looking to be one of the deals of the century as he helped guide Leicester to their famous, fairy tail title win.

After just one season at the King Power Stadium, Kante moved to Chelsea where he has once again made his presence felt, guiding the Blues to the top of the table with just a few games to go.

His dynamic performances in the middle of the park have seen his fellow players vote him as the Player of the Year.

Young Player of the Year

Alli, who also had his breakthrough campaign last season has continued his excellent performances for Spurs as they look to push Chelsea all the way for the Premier League title.

Alli is the Premier Leagues highest scoring midfielder with 16 goals. He has also bagged 5 assists as part of a Spurs team that have scored 68 goals, the second highest scoring team.