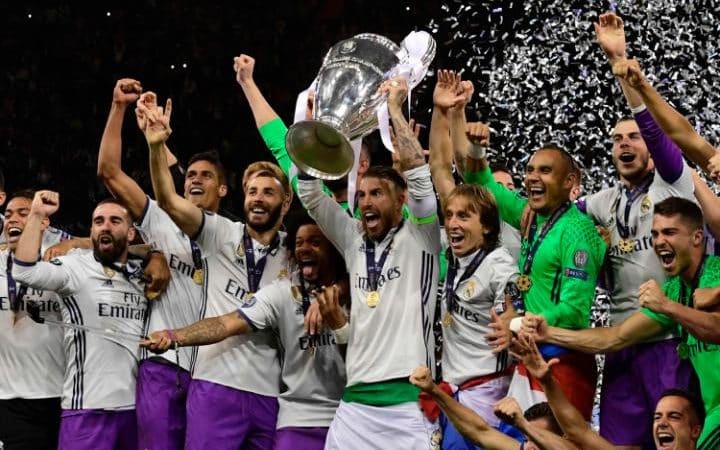 Real Madrid brushed aside Juventus to become the first side in history to retain the Champions League while achieving a domestic-continental double after more than 60 years.

Ah they’ve done it again, Real Madrid have won their 12th Champions League title, this one breaking many records. A comfortable 4-1 victory over Italian champions Juventus proved that Real are indeed capable of beating everyone.

Juventus though, have to keep up with another loss in a European final. The Old Lady has lost a whopping seven of its nine finals, losing five on the trott.

Juve are known for their experienced and rock solid defence, it was indeed a shock as to how easy Real found it to break down.

Soon after, Mario Mandzukic scored one of if not THE best goals ever scored in a Champions League final. A long ball from Leonardo Bonucci was picked out by Alex Sandro, who in turn found Higuain, finally, the ball found its way to the Croatian striker who smashed a bicycle kick into the Real net. Unbelievable, and the game was level.

Real’s second goal was nothing short of lucky, as Casemiro’s powerful shot deflected off former Real player Sami Khedira into the net. This is when it all started falling apart for Juve, their defence which had conceded only three goals en route to Cardiff, had gone into self-destruct mode.

Sergio Ramos showed off his acting skills and managed to get Cuadrado sent off. Though the Spaniard got a lot of slack, it didn’t matter at the end.

Marco Asensio finally got a goal, deserved for how well he’s played this season.

Madridistas rejoiced at the end, for they had won their 3rd Champions League in four years. The story was different for the Juve faithful, who suffered heartbreak yet again. La Duodecima has been achieved, Ronaldo’s scored 600 goals, and Real won the league. It can’t be any better at the Bernabeu.

The coming months and seasons will be interesting to see, signings, future trophies and much much more. Real dominance seems inevitable with the current crop of players and the harmony in the squad.

Juventus will look to make improvements and look back on what went wrong.

Nevertheless, the game was a great end to the 2016/17 football season.