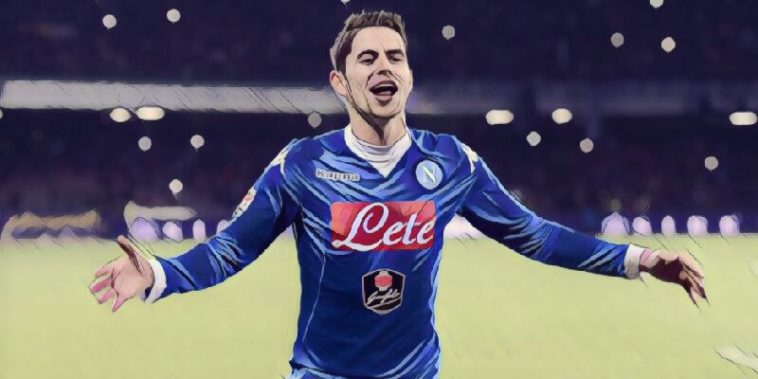 Napoli midfielder Jorginho could be finally set to complete a transfer to the Premier League with reports suggesting he has flown to England to complete a move.

The Italy international has been linked with potential moves to the majority of the top six in the last few months, although most recently it has been Man City who have looked most likely to secure his signature.

Despite the abundance of riches available to Pep Guardiola however, the Citizens have struggled to come to an agreement with the Serie A runners-up, who have been demanding a fee of €60 million (£53m) for the midfielder’s services.

Jorginho was one of the most integral parts of the Napoli side, who despite amassing an impressive 91 points last season, still couldn’t wrestle the Serie A title away from Juventus. The Neapolitans did, however, receive rave reviews about the style of their play under Maurizio Sarri, with Pep Guardiola saying they were one of the best sides he has ever faced when they met in last season’s Champions League group stages.

However recent reports in the last few days have suggested that with Man City struggling to come to an agreement with the Italians, Chelsea are set to hijack the deal.

Now, in fresh developments, the Daily Mirror is one of a number of outlets reporting that Chelsea have now agreed a deal with Napoli for the midfielder, who has now flown to London to finalise the deal.

The reports seem to have some backing to them with Napoli president Aurelio De Laurentiis suggesting that the Blues have offered better personal terms, while he also prefers the prospect of living in London rather than Manchester:

“If for personal reasons I won’t get into, the player prefers to live in London rather than in Manchester, I can understand him,” De Laurentiis said.

“If Chelsea pay him more, I can understand it too. So I can just apologize to [Man City chairman] Khaldoon [Al Mubarak].

Chelsea romped to the 2016/17 Premier League title with the dynamic midfield pairing of N’Golo Kante and Nemanja Matic, but agreed to allow the Serbian to join Manchester United last summer, a move which ultimately saw Chelsea slip out of the top four.