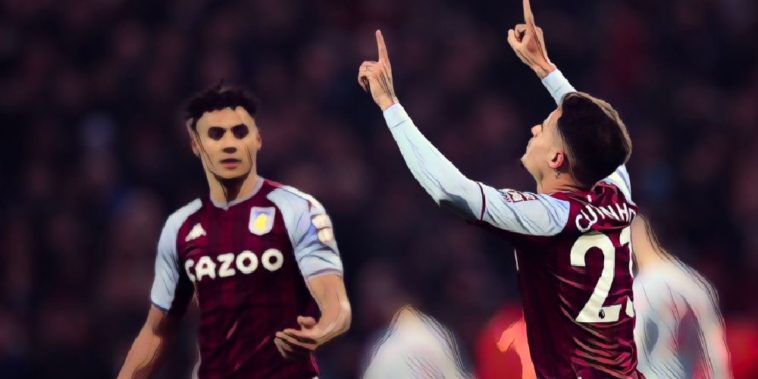 Philippe Coutinho netted on his Aston Villa debut as Manchester United threw away a two goal lead in an entertaining 2-2 draw at Villa Park.

The two sides only met on Monday evening, with Manchester United fortunate to run out 1-0 winners to progress to the FA Cup fourth round.

United were without a number of key players for the trip to the Midlands, with Marcus Rashford and Cristiano Ronaldo out injured, while Scott McTominay and Luke Shaw missed out through suspension. As for Aston Villa, Lucas Digne slotted straight into the side following his £25m move from Everton, while Philippe Coutinho had to settle for a place on the bench following his return to the Premier League.

The Red Devils took an early lead in that clash earlier in the week, and they did so again this evening, though were handed a massive helping hand following a howler from Emiliano Martinez. Alex Telles’ deft touch of the ball at a free-kick seemed to catch the Villa defenders napping, Bruno Fernandes carrying the ball towards goal towards the edge of the area, before his driven shot was fumbled by the Argentine ‘keeper who let it trickle over the line.

United have been on the end of widespread criticism for their performances this season, though for the first half-hour or so they put in excellent and organised showing, although Villa did start to build momentum before the break, testing David de Gea on a couple of occasions.

The hosts continued in the ascendancy into the opening stages of the second half, though in the 67th minute, as they tried to play out from the back, Fred capitalised on a slack ball from Morgan Sanson. The Brazilian laid it off to Bruno Fernandes who thundered the ball in off the underside of the bar to give the visitors what looked like a comfortable lead.

However, Villa were not perturbed by the deficit and would pull one back with 13 minutes to play, some good interplay down the left seeing debutant Coutinho drifting into the box, laying it off to Jacob Ramsey who lashed past De Gea.

Just four minutes later and the scores were level, the influential Emi Buendia picking out the run of Ramsey in behind the United defence, before he repaid the favour with a square ball across goal to find Coutinho who had the simplest of tap-ins at the back post.

You can't win anything with kids but you can come back from 2-0 down with a glamour loanee. Check out Villa's momentum after Philippe Coutinho came on in the 68th minute pic.twitter.com/t3oYZwzmE6

United could have won it deep into stoppage time, though an effort from Donny van de Beek was blocked as the game ended with what was probably a fair result for both sides.

Speaking after the game, Ralf Rangnick felt it was the best performance of his reign, but admitted it felt like a defeat to throw away a two goal lead.

“It is very difficult to find positives after these 95 minutes,” he told Sky Sports. “I felt it was the best game since I came here, in the first half for 30 minutes we dominated the game. We had taken took some steps forward but have a few things to do better.

“The plan was to press them in the midzone and we did that very well in the first 30 minutes, and control the ball, and those were the positives. When you are 2-0 up you have to defend better than we did in the last 15 minutes.

“Right now is very disappointed but what we showed was a step forward but it about getting the results, it feels like two points lost and given away.”