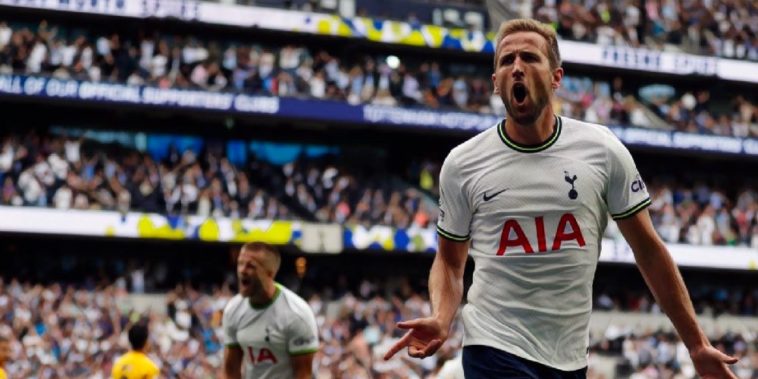 Tottenham briefly moved to the top of the Premier League after Harry Kane earned his side a narrow 1-0 win over Wolves.

It wasn’t the most entertaining of first-halves in the lunchtime kick-off in North London as both sides largely cancelled each other out, with Wolves narrowly the better side but as is often the case, were left lacking a cutting edge in the final third.

Harry Kane and Heung Min Son each hit the woodwork in the opening stages of the second half as Spurs upped their intensity after the interval, before Kane finally made the breakthrough in the 64th minute, nodding home from close range following a near-post Ivan Perisic flick-on from a corner.

Despite Spurs’ improvement, it was a game of very few clear-cut chances for either side, with a Ruben Neves free-kick the closest the visitors came to threatening Hugo Lloris’ clean sheet while Richarlison dragged a shot wide.

Speaking afterwards, matchwinner Harry Kane felt Spurs ‘deserved’ the victory, but was quick to credit Bruno Lage’s side for their performance.

185 – @HKane has now netted 185 Premier League goals for Spurs, overtaking Sergio Agüero with Man City (184) for the most goals scored by a player for a single club in the competition. Legendary. pic.twitter.com/IzqGldA3Lu

“Credit to Wolves, they made it difficult,” he told BT Sport. “In the second half we came out with intensity. We created chances and pressed better. We deserved the goal. We didn’t create too many chances after that but neither did they.”

Kane’s strike was his 250th in Spurs colours in all competitions, and 185th in the Premier League, moving him clear of Sergio Aguero in the all-time scoring charts in the division.

Asked about scoring more Premier League goals for one club than anybody else, Kane said: “It’s been a fantastic nine or 10 years in the Premier League. Hopefully, many more years to go. I always love scoring.

“The most important thing is winning games. Credit to the boys, they dug deep. We need to start games better. We need to improve. But the sign of a good team is winning when you don’t play at your best.”