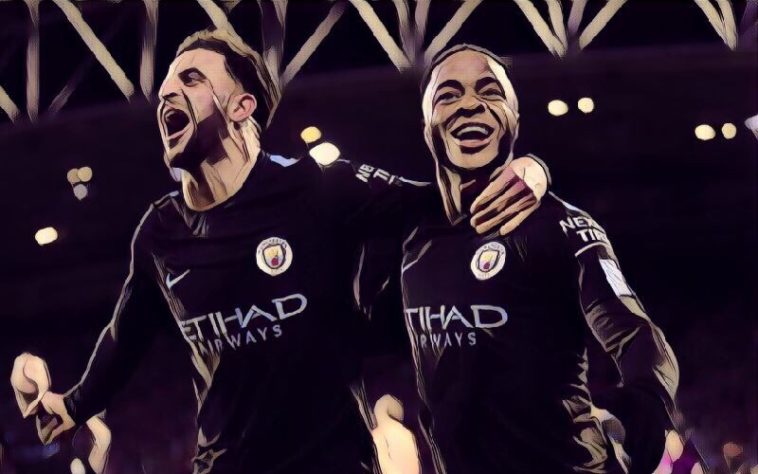 An unfortunate Nicolas Otamendi own goal put the home side ahead on the stroke of half-time before Sergio Aguero leveled with a penalty and Raheem Sterling nicked it in the final minutes. Here’s what we learned from the latest installment of City’s record-breaking season…

There was euphoria around the ground after 45 minutes when Huddersfield took an unlikely lead, but it was always going to be hard for the Terriers to get anything from the game. That didn’t stop them from trying, though, and it looked for a time as if they had gotten the luck they needed to snatch a point or even more. You can’t fault the home side for their workrate, but they never looked like adding to their lead and will be disappointed with a lack of attacking input. The defenders in particular were visibly devastated to let the lead slip and will be wondering why they conceded an equaliser to a fair but needless penalty kick.

Conceding No Obstacle for City

Manchester City’s defense has been uncharacteristically solid this season, particularly from set pieces, so it was perhaps a surprise to see them fall behind when a Huddersfield corner deflected off of Otamendi and past Ederson. But, where most sides would have crumbled, City only grew stronger after the break. They dominated the game and kept the Terriers from managing a single shot on target- even after blues captain Vincent Kompany came off for Gabriel Jesus late on.

Sterling the Savior Again for Pep

In almost an exact repeat of the Bournemouth game in August, Raheem Sterling saw a effort loop into the far left corner of the net to win a game City had been trailing late on. He knew a little bit less about this one, undeniably, but he still had to be in the right place. He’s also bagged crucial late goals against Feyenoord, Everton, Shaktar and Napoli this season.

In fact, the Englishman is City’s top scorer this season, with twelve goals in all competitions (although Aguero, Sané and Jesus aren’t far behind). It’s Sterling’s best ever goal tally in a season already and he’ll surely have on eye on the twenty-goal mark before the end of the campaign.

Pep Guardiola is an under-recognised master of the art of the comeback but eyebrows were still raised at his decision to bring off Gabriel Jesus for Vincent Kompany ten minutes from time. While City hadn’t exactly been tested defensively, it was still a big gamble to substitute the skipper for a striker when they did, after all, have a point to take back to Manchester.

But credit to Pep for refusing to be satisfied with the draw. In the event, City fans needn’t have worried, as Kyle Walker and Fernandinho played the role of centre-back easily and Jesus proved crucial: it was his saved shot that Sterling converted for the winning goal.

Pretty much everything is going right for Manchester City this season. Bar injuries to Benjamin Mendy and John Stones, City have found themselves in a bubble of invincibility bought on by their incredible form, workrate and goalscoring touch.

However, you make your own luck and that was plain to see today as City finally got the winner they deserved. It’s the kind of luck you might associate with champions, and the kind of luck that has been attributed to Leicester, Manchester United and Chelsea in their respective recent title-winning seasons. In reality, that’s what you get when you’re playing better than everyone else in the league. It could be argued that City are going one step further- has there ever been a better team in the Premier League? Well, ask me again in May. But I expect it to be close.