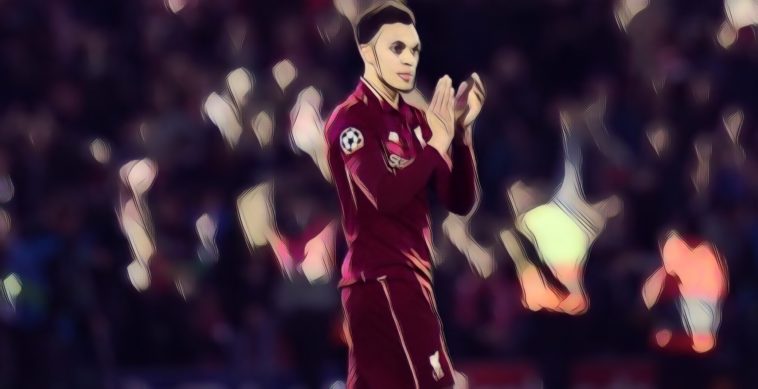 Since the start of last season, many a Liverpool fan would have told you excitedly about the rise and rise of local lad Trent Alexander-Arnold. Hyperbole aside, it is hard to deny that the past couple of seasons have seen a dramatic and rapid ascent for the Red’s number 66.

A lad from West Derby, brought up around the corner from the club’s old Melwood training ground, he had been earmarked for success by many a punter. Indeed, some of the highest praise came from former captain and club icon Steven Gerrard, who name-dropped the youngster in his autobiography.

Excitement surrounding a hot, local prospect coming through the academy is nothing new and plenty have fallen by the wayside as they struggle to make the great leap to the first team.

However, Alexander-Arnold’s talents have not fallen away; his progression has been relentless and increasingly confident. His worth to this current Liverpool side has been growing as well, culminating in his heroics against Barcelona in the Champions League semi-final fight back. After an emotional and historical night at Anfield, the local lad will have turned heads all over the world as he announced himself to Europe’s elite.

Now on the cusp of breaking a 24-year old record; Alexander-Arnold is set to become the youngest ever player to start in consecutive Champions League finals. His antics against Barcelona may have already immortalized him to the Kop and now it may well be time for the full back to carve his own name into the historical fabric of Europe’s showpiece final.

The 20-year old has been in increasingly impressive form this season; claiming the regular right-back berth for his own and subsequently becoming an invaluable attacking asset. That he has barged his way to the front of the first team queue with such ease is no small feat.

Both Joe Gomez and Nathaniel Clyne were firmly ahead of the youngster going into last season, with either player considered a solid and reliable full back option on the right side. While it’s fair to say that Alexander-Arnold has benefited from injuries to both of his first team rivals, there is no doubt that he grabbed the opportunity with both hands.

From scoring his first senior goal in August 2017 against Hoffenheim, the 20-year old has gone from strength to strength. He is now one of the first names on the team sheet and with an astonishing 12 assists to his name in the Premier League this season, he has been one of the most important players in Liverpool’s title charge.

His emergence into Liverpool’s first team was a perfectly timed collision course with Jurgen Klopp’s seismic tenure at Anfield.

The England international has blossomed under the guidance of the eccentric German, who has slowly but surely chipped away at the full back’s rough edges, chiseling out one of the finest homegrown talents in the Premier League.

Those aforementioned rough edges had come to the fore in the weeks leading up to Liverpool’s showdown with Barcelona. Some wobbly defensive displays against Huddersfield and Cardiff were clearly not going unnoticed in the technical area.

The full-back left his right-hand flank exposed a few times in both games, which, against better opposition could have been very costly. The decision to omit the youngster from the 3-0 defeat at Camp Nou, did raise a few questions as to whether Klopp thought he was ready to play on such a big stage with so much at stake.

If his absence in Catalonia threatened to raise a few concerns about the lad’s maturity and capability for such a big game, they were well and truly quashed by Alexander-Arnold’s display in the return leg. Restored to the starting XI, the right-back had the Kop purring and the opposition stunned as they fell to a chastening defeat.

Notching two more assists, taking his tally to a tidy 15 in his 38th game of the season in all competitions, the full-back was a major player in his side’s famous victory.

His first delivery into Wijnaldum was a wonderfully weighted delivery, passing the ball neatly into the path of the on running Dutchman. The second was a ludicrous bit of quick thinking from a corner. A swift delivery, expertly cut in with precision behind a scattered Barcelona back line, to find Divock Origi for the decisive goal; it was truly masterly stuff from a young lad at the very top of his game.

It is all the more impressive when you consider the big centre-backs were still on their way up and it was likely an unauthorized piece of play by the 20-year old, who showed tremendous responsibility to take matters into his own hands.

And he served up *THAT* genius assist. ? pic.twitter.com/eSZWVdftVb

That result is now being mentioned in the same breath as St Etienne, AC Milan, Chelsea and Borussia Dortmund. But if it is up with Liverpool’s finest work in their rich European history, then it is surely also a watershed moment for the club’s number 66.

The youngest player on the field was arguably the most effective and ambitious that night, with undeniable quality and distribution to back up his unshakable confidence.

His elevation from Liverpool’s fabled academy been more impressive as this season progressed. However, that Barcelona game is surely the moment when the wider football community woke up to devastating talents of this young lad currently living every fan’s dream and showing he truly belongs on the biggest stages of the game.

If Barcelona was one hell of an epic game to announce yourself; helping his boyhood club to a sixth European Cup win in Madrid tonight, would almost certainly solidify Alexander-Arnold’s status as one of the brightest full back talents on the continent.