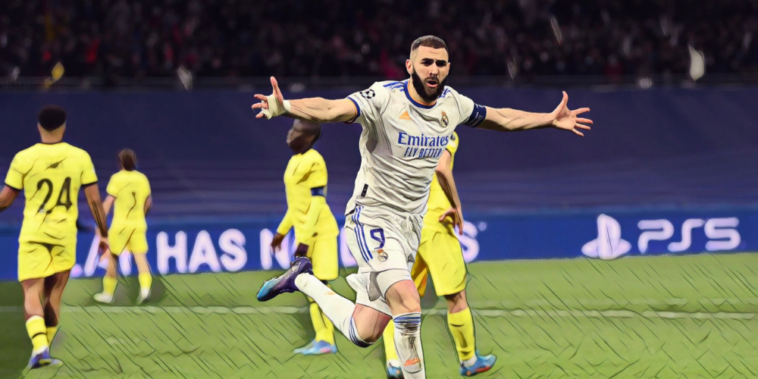 We’ve reached the final four in this season’s Champions League ahead of two semi-final showdowns next week, as each of the remaining quartet compete for a place in the final.

It’s the Premier League vs La Liga in both semi-final ties, as Manchester City take on Real Madrid and Liverpool meet the tournament’s surprise package, Villarreal.

So for those of you who like to follow the latest odds and would be interested in the bestÂ Bet365 bonus, we’ve decided to look at how the bookmakers rate team’s chances of winning the Champions League as we head into the semi-finals.

Villarreal enter the semi-finals as huge underdogs, having upset the odds to reach the last four of this competition for just the second time in their history.

Unai Emery’s side are competing in the Champions League for the first time since the 2011/12 season, having earned qualification after beating Manchester United in last season’s Europa League final.

🥳 16 years between Villarreal's appearances in the Champions League semi-finals!#UCL pic.twitter.com/VkLixv15XJ

The Yellow Submarine reached the knockout stages alongside the Red Devils this season, before upsetting both Juventus and Bayern Munich to reach this stage.

Liverpool will be wary of the threat Villarreal will pose over two legs in the last four, after two resilient performances dumped out one of the tournament favourites in Bayern.

Arnaut Danjuma’s performances are believed to have earned admirers from Anfield and the Dutch winger will be the danger for Villarreal, having scored six goals in this season’s Champions League and 16 for the season in all competitions.

Real Madrid are aiming to reach the Champions League final for the first time since 2018, the fourth of four trophy successes across a five-year period.

The Spanish giants are comfortably clear at the top of La Liga, but are considered outsiders given the strength of the Premier League sides remaining in the competition.

Carlo Ancelotti’s team eliminated Chelsea in the previous round after a convincing first leg performance in London, though the second leg demonstrated the vulnerabilities that Manchester City will hope to expose.

Karim Benzema has scored 25 league goals this season—the most he's ever managed in La Liga ✨ pic.twitter.com/c6IF4wKya2

Karim Benzema will be crucial to their hopes and has scored 38 goals in 38 games this season, with 12 of those goals coming in the Champions League.

He has scored seven times across the club’s last three knockout fixtures, including back-to-back hat-tricks against PSG and Chelsea and the decisive goal in the second leg with the West Londoners.

City will start as favourites for their semi-final tie, but Real Madrid have experience in this competition and a collection of names capable of off-the-cuff match-winning moments.

Manchester City are hoping to make the final step towards a maiden European triumph this season, having been beaten in last season’s final by Chelsea.

Pep Guardiola’s side thrashed Sporting Lisbon in the last 16 to set up a tricky quarter-final clash with Atletico Madrid, but showed composure and quality to progress despite the predictable negative tactics of the Spanish champions.

It’s another return to Madrid in the semi-finals in the first meeting between City and Real Madrid since the 2019/20 campaign.

City are arguably the strongest team in world football right now and are within touching distance of another Champions League final, but face a stern test against the record 13-time winners in the last four.

Liverpool have been cut to 6/5 favourites to win the Champions League this season, ahead of a semi-final showdown with outsiders Villarreal.

The Reds cruised through the group stage with a perfect record before beating Inter Milan and Benfica to reach this stage and next face Villarreal in a rematch of their 2015/16 Europa League semi-final.

The best of the action from our 3-3 draw with @SLBenfica as we progress to the @ChampionsLeague semi-finals on aggregate 👊⚽️ pic.twitter.com/W7aSgCCBov

One point behind Manchester City in the Premier League title race, it is crunch time for Liverpool with every game now – in fitting with cliche – representing a final.

Liverpool beat City in the FA Cup semi-finals last weekend and could yet meet their Premier League title rivals in the Champions League final as a modern rivalry reaches new heights.