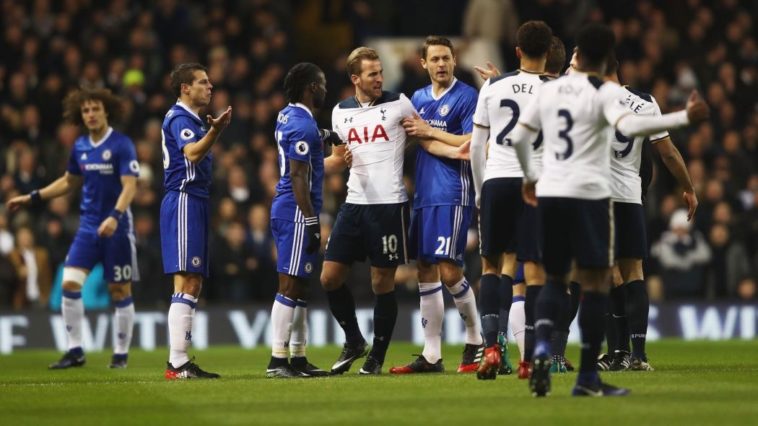 Last weekends results meant the door was left slightly open for the hopes and dreams of all Spurs fans in terms of picking up the first ever Premier League title at White Hart Lane in its final season.

Chelsea can try and deny it all they want but they are experiencing an alarming wobble in form. This can only give the Spurs team a major confidence boost as they moved within four points of the league leaders with six games left of the season.

Whilst Spurs brushed a helpless Bournemouth aside in the early kick off on Saturday, Chelsea looked laboured and extremely nervous against Manchester United in the Sunday late kick off. They failed to register a single shot on target in the whole game, a record that has stood for over 10 years for Chelsea.

On Monday I thought Gary Neville’s assessment of the league run in was most useful as a player who has been on both sides of the race in his time at Man United.

He made the point that if the gap was to be reduced any lower, Spurs would be one game from the title as they have such a superior goal difference to the league leaders and the gap would have slipped from 10 points the other week in their loss to Palace to under 4 points which would really set the cat amongst the pigeons.

There is precedent for such a lead to be blown at this stage of the season. The first time Man City won the league title they trailed a far more experienced Man United side by 8 points with six games to go and they managed to overturn that deficit.

As for Chelsea, they seemed a side that had been given a shock that for once this season their medical staff might have to earn some money and treat some injuries. The Blues have been extremely lucky with the lack of both injuries and fixtures they have had this season, all due to their appalling finish of 10th last season.

Tricky tests on the way to the title

If Spurs can do what Chelsea did earlier this season and win 13 games on the bounce, it would be a likely first title for the Lilywhites, although they face tricky tests along the way most notably Crystal Palace at Selhurst Park.

For many Spurs fans, we find ourselves gritting our teeth at the prospect of tricky encounters away at Hull and Leicester knowing that we can easily beat United and Arsenal at the lane quite comfortably.

Chelsea however have had the rub of the green all season and this is not going to change. To be in a position where they can play five of their remaining six games before Spurs is nothing short of lucky. It is similar to last season where Leicester went out every week without any pressure and always having a big chance of extending the gap rather than fighting to keep up the chase.

Chelsea also quite fortunately have four league home games, two of them will be against already relegated teams in Sunderland and Middlesbrough. They couldn’t ask for an easier chance to win the league from here on in.

I also think that the semi final of the cup this coming Saturday is being overplayed in the media and the fans as a ‘league decider.’ For sure whoever comes out on top will have gained huge amounts of confidence. However I still think the Premier League is a completely different matter and nobody should be reading so much into the result on Saturday.

Overall, from a Spurs perspective, it would be a great season for us if we can consolidate our position in the table and have a really good attempt at the FA Cup.

All we can do is win our games and hope that for once another club in the run in does us a favour this season and we would love nothing more than to snatch the league away from Chelsea at the end.